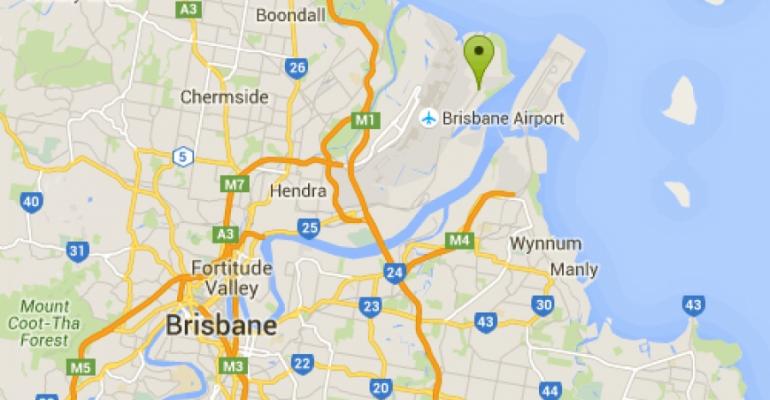 Proposal would build a terminal in deep water on the north side of the mouth of the Brisbane River at Luggage Point (Map: Google)

Royal Caribbean and Carnival have declined to comment on a proposed A$100m purpose-built second cruise ship terminal for Brisbane.

The Brisbane Times has reported that the Queensland Cabinet is set to discuss a ‘market-led proposal’ from Royal Caribbean and Carnival to build the terminal in deep water on the north side of the mouth of the Brisbane River at Luggage Point.

The land, which has the added advantage of being near Brisbane Airport, was designated for a future cruise ship terminal by Brisbane City Council in 2013 and included in the Brisbane City Plan in 2014.

Fairfax Media said the market-led proposal to Queensland Cabinet is being led by the Port of Brisbane, which owns the land, and the two cruise ship operators.

If the proposal is accepted it is understood Royal Caribbean and Carnival will have exclusive rights to the terminal which would be able to accommodate superliners by early 2019.

Brisbane’s cruise ship terminal at Portside Hamilton can only accept cruise ships up to 270mtrs in length due to the relatively shallow depth of the river as well as height restrictions imposed by the Gateway Bridge.

Cunard’s Queen Mary 2 is 345mtrs long, for example, and Royal Caribbean’s Allure of the Seas and Oasis of the Seas are both 362mtrs long.

According to a report prepared by the AEC Group, Queensland is Australia’s second largest cruise shipping market, generating A$588.8m in direct and indirect expenditure for Queensland.

The cruise industry not only provides an economic boost for Brisbane but also coastal Queensland, in particular Cairns, Cooktown, Port Douglas, Thursday Island, Mackay, the Whitsundays and Townsville.

A spokeswoman for Carnival Australia directed enquiries to the Queensland government.

Royal Caribbean issued this statement: 'RCL Cruises supports the development of more berthing options for Queensland. As the deployment of our own Legend of the Seas to Brisbane this year has shown, we are very keen to grow our business in the Sunshine State. But to do that beyond our current commitment, we need a terminal that can cater for our bigger ships. We are working with the Port of Brisbane to future proof Brisbane.'

The Queensland Cabinet is expected to discuss the proposal at its first meeting of the year on January 25.