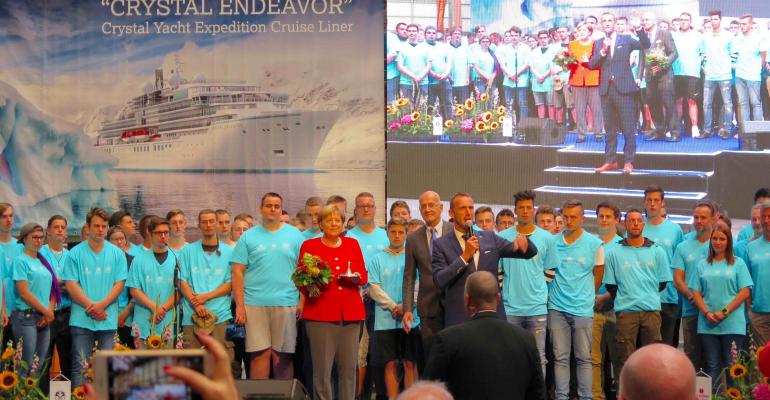 'I've seen all the images and I wish I could take a voyage on that vessel,' Merkel remarked after making a buoyant entrance to Stralsund's giant covered building hall to the tune of 'Gonna Fly Now' from 'Rocky.' Hundreds of yard workers in blue 'Team Endeavor' shirts looked on.

Merkel said it was an emotional day for her as she returned to her political home, Mecklenburg-Vorpommern. 'People here in Stralsund will always do their best to create great value ... We know how to compete. We are very proud in Mecklenburg-Vorpommern and Germany and we want to make the label "Made in MV" an attraction,' she said.

Genting HK chairman and CEO Tan Sri Lim Kok Thay called it an emotional day for him, too, 'as we play our part to bring back the shipbuilding industry to the northern shores of Germany.'

Historically, Germany has built a 25% share of the world's cruise ships. Thanks to Genting HK's investment, that will go up to a 35% share by 2020, Lim said.

Global-class keel to be laid next month

Three years ago Genting HK acquired struggling yards in Wismar, Stralsund and Warnemünde for €230m and pumped in €250m to bring them up to the capability of building the latest generation, 200,000gt mega-ships. The keel for Dream Cruises' first Global-class ship will be laid next month in Rostock.

The MV yards have doubled jobs to 2,500, contributing strongly to the state's economy, with economic output of €2bn a year expected starting in 2020 with the construction of one mega-ship and one mid-sized ship a year.

'However,' Lim added, 'we hope we can get as much support as possible from the state and the Federal Republic of Germany so that MV Werften may achieve its vision in becoming another leading, successful example of German manufacturing.'

During her address, Mecklenburg-Vorpommern Prime Minister Manuela Schwesig noted that even during hard times in the state, the yards never stopped training workers, and 100 interns are learning trades in the Stralsund facility. She thanked Genting HK for keeping its promises about reviving the business.

Merkel and Schwesig joined Lim, Crystal Cruises president and CEO Tom Wolber, MV Werften president and CEO Peter Fetten and other officials to place 88 US dollars and 88 euro coins in the keel—8 being a lucky number in Asia. Then Merkel radioed a crane operator to begin lowering the 400-ton keel block. After that the shipyard apprentices delighted the chancellor by presenting her with a tool they use to 'keep things in alignment.'

Crystal Endeavor's keel-laying is a 'big moment in Crystal's history,' Wolber told Seatrade Cruise News during the festivities. 'It shifts the focus back to the ocean-going itineraries and products, the bread and butter of what we do and something our Crystal Society members are eagerly awaiting.

'The Crystal Endeavor is just whetting the appetite for the Crystal Diamond class, which is going to be a spectacular ship ... a game-changer,' he said.

Wolber added that Crystal Endeavor's sister ship is now scheduled for delivery in 2021—instead of 2020. Crystal's Diamond-class ship will follow in 2022.

As for Merkel's wish to take a cruise, 'I'll make room for her,' Wolber said.