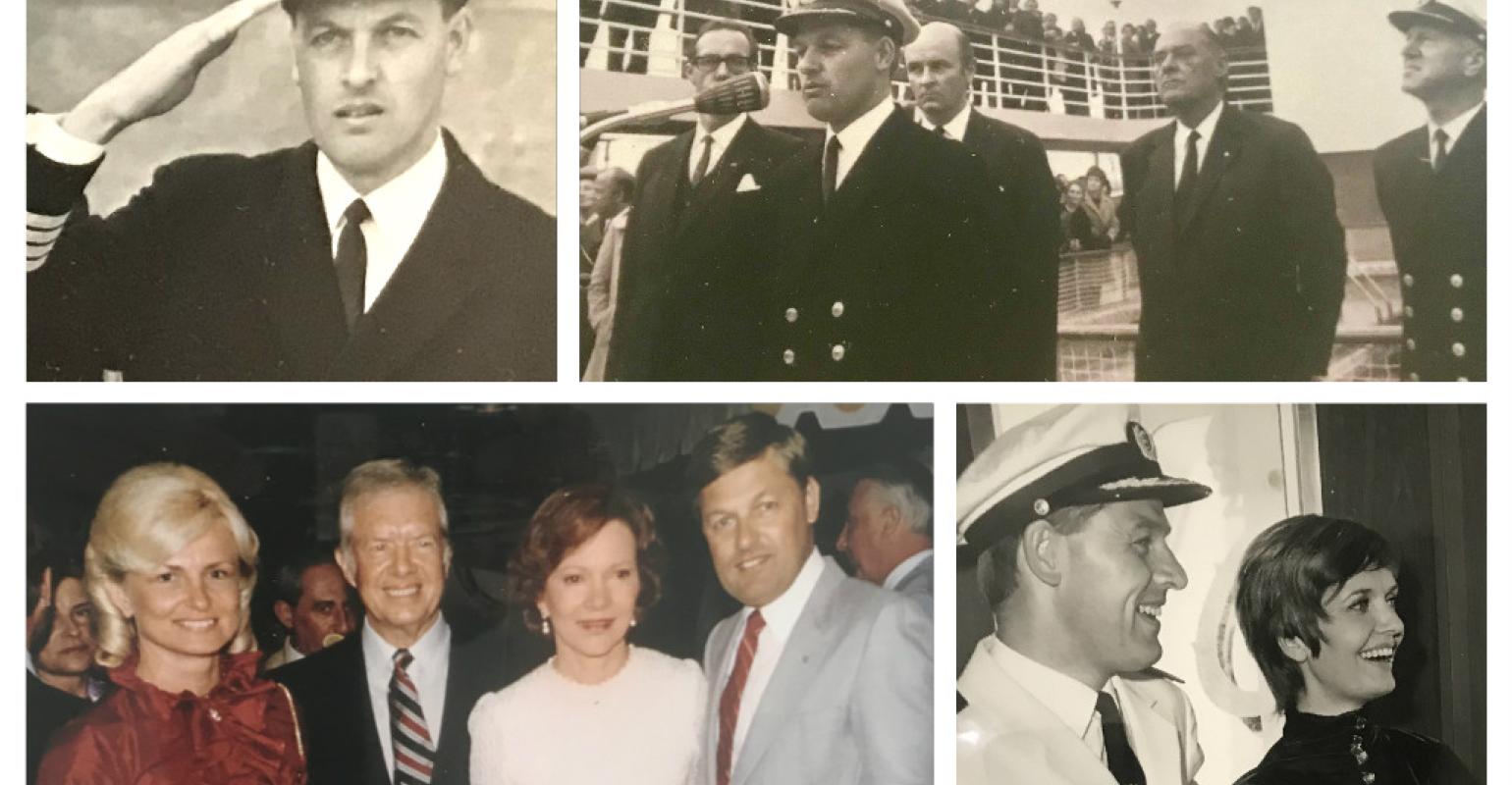 From upper left, clockwise, Capt. Lindstad, 32, salutes and speaks at Song of Norway's 1970 delivery, with the actress Florence Henderson during her visit to Song of Norway (she was in a 1970 movie by the same name about the Norwegian composer Grieg) and in 1982 at Song of America's naming with former President Jimmy Carter and first lady Rosalynn Carter. At far left is wife Gabriella

Flags were flown at half-mast on Royal Caribbean ships one day last week as a salute to Capt. Aage Lindstad. He was the first captain for the line, who brought out Song of Norway in 1970.

Lindstad, who went on to lead Royal Caribbean's marine operations shoreside, died July 13 at his home in Ponte Vedra, Florida, with family by his side. He was 81.

'Captain Lindstad was a young man — only 32 when he took command — and he represented the modern, forward-looking attitude of Norway’s merchant service and our fledgling company,' Royal Caribbean Chairman and CEO Richard Fain said in a company memo. 'He remained with us for the remainder of his career, eventually serving as vice president of marine operations and inspiring a new generation of shipboard leaders.'

Fain told employees they may not have met Lindstad, who retired in the late 1990s, but they've inherited his legacy.

'One of his first tasks after joining was to create what he called “rules and regulations” and we called “the Bible," Fain elaborated. 'His 150-page manual detailed everything from watchkeeping duties to officers’ dress and affected everyone from himself to deck boys. Also, one of his favorite phrases was, “sure, absolutely,” ushering in our can-do spirit, where nothing seems impossible.'

Lindstad was at Wärtsilä Shipyard in Helsinki during Song of Norway's construction.

Fain recounted that while awaiting his ship, he also took it upon himself to visit every port of call, seeing it anew, 'through Royal Caribbean eyes.

At the helm from Norway to the Caribbean

'And it was Captain Lindstad,' he added, 'who gently eased Song of Norway from the berth in front of Oslo’s Akershus Castle early on the morning of October 8, 1970, headed south down the Oslofjord, west across the North Sea, through the English Channel and out into the Atlantic, pointed her toward the Caribbean and Miami.'

Lindstad went on to helm the next two Royal Caribbean ships, Nordic Prince in 1971 and Sun Viking in 1972. He took his shoreside job in the mid-1970s.

Capt. Svein Sleipnes was hired by Lindstad in the 1990s for his own first shoreside role as port captain and considers him a mentor.

'It was a great experience coming from the ships and learning from such an expert who was well respected and on top of his game,' Sleipnes said. 'Having been a captain on their first vessel and then running the marine department, he had a depth of knowledge from both sea and shoreside, and was always professional with the utmost integrity. I learned a lot under his leadership.

'He was very strict. But he was always fair. Some feared him, but if you did your job, there was nothing to worry about. To me, he was just fabulous,' Sleipnes said.

Their friendship continued after both left Royal Caribbean. 'He was an officer and a gentleman,' Sleipnes said, 'a well-respected cruise veteran, whom I admired. He will be sorely missed.'

'We will forever be grateful for Captain Aage Lindstad’s contribution to our organization,' she said.

Being part of Royal Caribbean's launch as perhaps cruising's youngest captain was his proudest professional accomplishment, according to his youngest son, Nils, who's part of the Royal Caribbean family as associate VP, sales and trade support, for Azamara. He also was thrilled when Royal Caribbean sent him to Harvard Business School for management studies.

Lindstad was born and raised in Nes, a small enclave near Hamar, Norway. His father died before he was born, and he left home at 15 to work at sea, first on cargo ships. He graduated from the merchant marine academy in Farsund, where he met his first wife Arna. They had three children.

'I grew up with postcards from African countries, my first bike was brought back from Japan and he would talk about when he visited Easter Island,' said Gro, his firstborn child. He recounted trips through the Suez Canal and waiting in Mombasa to unload cargo in intense heat. Some of the crew got malaria. As first aid officer, he had to get medicine from the ship's agent to try to get the malaria under control.

Gro said her father viewed his greatest accomplishment as his five children and four grandchildren.

'Dad loved the outdoors and was at his happiest walking in the Norwegian mountains and carrying his fishing rod, and especially in the area called Raggsteindalen, where we also had a cabin for many years,' Gro said. 'This is also where he taught all of us to enjoy hiking and being outdoors.' He often took the family skiing.

Applied to a newspaper ad

Lindstad served as staff captain for Norwegian America Line before applying to a newspaper advertisement for the new Royal Caribbean Cruise Lines.

He was in the spotlight at Song of Norway's delivery from Wärtsilä. When his family got to sail with him, Gro recalls his popularity, with passengers lining up to have photos taken with him. He was often told he looked like Robert Redford.

Lindstad's first marriage ended in divorce and he met his second wife Gabriella on captain's night aboard Sun Viking where she was a passenger. They had two sons, Aage Jr. and Nils. After Lindstad retired, he and Gabriella lived in Alachua, Florida, and more recently in Ponte Vedra, near Aage Jr.

Besides Gabriella, Gro, Aage Jr. and Nils, Lindstad is survived by his twin sister Aase, daughter Merethe of Norway and four grandchildren in the US. A son Per from his first marriage died at 13.

Family members are gathering Sunday in Raggsteindalen to celebrate his life. A memorial service is planned for Aug. 31 at the Norwegian Seaman's Church in Davie, Florida, time to be advised.