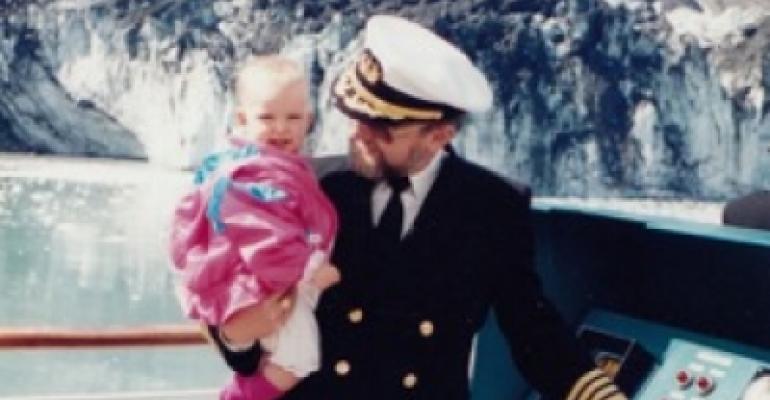 Capt. Maalen with daughter Cortney on the bridge wing PHOTO: Terry Franklin Maalen
Reidulf Maalen, one of cruising's most popular captains, with huge, loyal followings at Crystal Cruises and before that, Royal Viking Line, died Sunday at home in Las Vegas. He was 73.

'He was the quintessential cruise ship captain,' said longtime friend and colleague Dietmar Wertanzl, president of CMI Leisure. 'Not only was he a great seaman ... he was a terrific host, and the crew loved him, too. He understood [the maxim] "Happy crew, happy guests."'

According to Wertanzl, Maalen 'went the extra mile' in his interactions. He formed relationships with the guests, and travel agents appreciated what he did for their clients.

'He had a great following,' Wertanzl said. 'He was a great Viking, too. He loved to sail into the Norwegian Fjords where he could add value with a little stop here, a sail by something interesting, a story.'

Maalen's signature greeting on the public address system was 'It's me again.' He was highly visible aboard ship but also known for countless quiet acts of kindess.

Tor Bang was the chief purser aboard Royal Viking Star in 1982 when he first met Maalen, then chief officer.

'Reidulf’s professionalism was topped only by his genuine interest in people,' Bang said. 'He had the rare ability to make you feel that you were the most important person, deserving of his full attention.'

When Bang brought his parents on a cruise in 1983, they didn't know much English, and his father was confined to a wheelchair.

'Every morning at 8, when Reidulf went off duty, he would come to the dining room to have breakfast with them. He would then share hours of his free time with them ... He was a mensch—a person who is good to other people.'

What he loved most about his work, Maalen's wife Terry said, were his crew, passengers and the adventure every day could bring. He felt that if his crew thrived, all passengers would have a wonderful time.

Once, when his ship called In Manila, he invited all Filipino crew members' families on board for a tour and lunch. At sail away, many families were on the dock, and crew and passengers waved the Philippine flags Maalen had distributed.

There were many tears of joy that day, Terry said.

Growing up on the tiny island of Tustna in central Norway, Maalen's window overlooked the shipping lanes and at age 13 he told his parents he wanted to go to sea as soon as he could. He left home at 15 to become a deck boy on a freighter leaving for Amsterdam and was seasick all the way. But that didn't stop him.

Later, he even was among the heroes who rescued some crew in a shipwreck.

Wertanzl was a Royal Viking hotel manager when Maalen took his first command as captain, for an Amazon River cruise in 1987. Later, they were part of the site team for the construction of Crystal Harmony in Nagasaki, Japan. Maalen served on that ship and Crystal Symphony and was appointed the first master of Crystal Serenity in 2003.

Wertanzl recalled how John Sharpe, then-president of Four Seasons Hotel and Resorts, sailed on Crystal Symphony and came back raving about Maalen as 'a guy who understands hospitality.'

A family at sea

Terry Franklin, a vocalist, had performed on Royal Viking Star during China sailings in the early 1980s when Maalen was aboard but their romance blossomed years later when she joined Crystal Harmony as social director/entertainer. They married in 1994 and daughter Cortney was born a year later. She grew up on the Crystal ships and had 'more aunts and uncles than any child I know,' Terry said.

Cortney began suffering from tummy aches; it turned out she was getting chocolates from the stewardesses' trolleys and treats from the crew. 'We ended up having to put a sign up in crew mess and in hallways: "Please don’t feed Cortney,"' Terry said. 'The crew took care of her, loved her and, to this day, she is close to many of them.'

After retiring from Crystal, Maalen became the master of Wedge Too, a magnificent private yacht based in Monaco. Then, when Wertanzl became president of Cruise West, he lured Maalen back to cruising to command Spirit of Oceanus's around-the-world expedition voyage in 2010.

A heart for San Francisco

Asked his favorite port to sail into for a story, Maalen once said: 'It is a close race between San Francisco and Sydney, but my heart has to go with San Francisco ... You see the downtown skyline, Fisherman’s Wharf and Coit Tower. As the perfect backdrop for Embarcadero and the waterfront, the city is beautiful and fascinating, a melting pot of different cultures, with myriad things to explore and experience. Almost everything is within walking distance from the dock.'

He added: 'Any navigator who has had the pleasure of visiting the “City by the Bay” has most likely experienced the challenge that navigating San Francisco Bay can be. Very often, all the beautiful sights are totally obscured by fog so dense that you can almost cut it with a knife. Add to that extremely difficult tidal conditions at times, and you have a very challenging port to navigate.

'However, when the sun starts to burn the fog off and this magical city appears, all the efforts negotiating the challenges are most certainly worth it. San Francisco is a city with a soul.'

Bang recounted how Maalen was a regular at the Royal Viking Line crew's biannual reunion in Geilo, Norway. Wearing his captain's uniform, he greeted everyone in the captain’s dinner receiving line with kind words of welcome and recognition.

'Reidulf was indeed the first gentleman of the seas, respected and loved by those whose lives he touched,' Bang said. 'His authenticity and charisma epitomized a highly competent leadership.'

In recent years, Maalen was an owner and partner of Global Marine Services, a consultancy whose projects included a man overboard detection system that received a patent shortly before his death. He was working to get the (Multi-) Sensor Offshore Safety System (SOS) manufactured because, as he told Seatrade Cruise News, 'One [person] that goes missing is one too many.'

This was among many current projects. Maalen was 'still active, full of ideas,' Wertanzl said, until losing his battle with prostate cancer.

In addition to Terry and Cortney, both of Las Vegas, Maalen is survived by a daughter from his first marriage, Bente, who lives near Trondheim, and a brother and sisters in Tustna.

Plus, as Terry put it, 'the countless friends all around the world that thought of this man as family, and rightly so. He was.'