Cruise leaders bandy about new ships and where they'll go 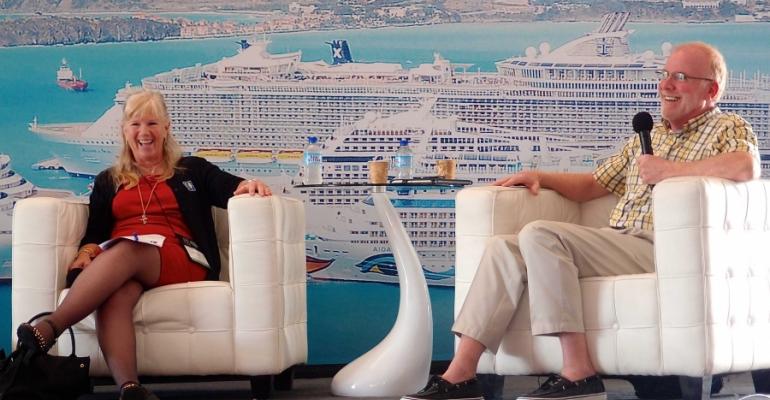 Travelers can expect further innovations and surprises in the next-generation ships. As for the itineraries—stay tuned.

Leaders of top Caribbean cruise brands talked about their newbuilds and where they'll go during Wednesday's CEO round table at the Florida-Caribbean Cruise Association conference in St. Maarten. FCCA president Michele Paige moderated.

Details of Carnival Vista, due to enter service in April 2016, will start to unfold early next year, according to Gerry Cahill, president and CEO of Carnival Cruise Lines.

'There will be new features on the open decks not seen before in the cruise industry, and innovations in the accommodations and bars,' Cahill said.

'We are still trying to decide where to homeport the ship. China seems to be very popular these days,' he quipped.

While Cahill was joking about a Fun Ship for China, the line has done so well with Carnival Spirit in Australia that it's sending a second vessel to that market.

'Last summer, there were a lot of pricing problems with Caribbean ships. We dealt with it. But in the future, we're very dependent on destinations providing additional experiences to create demand,' he told the FCCA audience. Since Carnival relies heavily on repeat cruisers who look for new destinations and experiences, 'It's important to innovate in the Caribbean.'

Cahill said the ports where Carnival has made investments—places like Grand Turk and Puerta Maya in Cozumel—get the highest ratings. Another Carnival destination opening next year is Amber Cove in the Dominican Republic.

'You may view these ports as giving competition to your ports, and to some extent they do. But they also give us opportunities to visit the surrounding ports of call,' Cahill said.

Besides what destinations do, it's important how they market their brands, said Adam Goldstein, president and COO of Royal Caribbean Cruises Ltd. He pointed to Costa Rica's ecotourism profile as 'compelling.'

A top-class destination, Singapore could have rested on its laurels but wanted to stay on top so it linked 'powerful offerings' like a Formula 1 race to its new integrated resorts, he said.

'The next two ships after that, we'll wait and see how these new markets, Asia and China, develop,' said Kevin Sheehan, president and CEO of Norwegian Cruise Line. 'With only 13 ships there is no need to push out to different markets as much as when we move up to 17 ships when that makes more sense for us to push out.'

The Breakaway-class innovations 678 Ocean Place and The Waterfront, which 'keep people out and about until the early morning hours,' will continue, as will O'Sheehan's pub, a 24-hour spot.

As for one feature of Royal Caribbean's next-generation ship, 'If you have never jumped out of a plane, it's the next best thing,' president and COO Adam Goldstein said in describing Quantum of the Seas' RipCord by iFly. And the Two70° lounge, with its giant windows and robotic screens melded into the entertainment, will be an 'amazing experience.'

The new high-speed Internet service via O3b Networks, which went live on Allure of the Seas Saturday, bringing 35 times as much broadband capacity, is 'a real breakthrough and something we'll bring to Quantum of the Seas, too.'

Quantum on Wednesday was 23 days from taking its first guests in Southampton and 25 days from its first revenue cruise, a trans-Atlantic voyage to Bayonne, N.J.'s Cape Liberty.

With Royal Caribbean's bold strides in China and elsewhere, Goldstein got the inevitable question about the Caribbean's relevance. As ever, he responded: 'The Caribbean is still our middle name and our largest area of deployment.

'The Asia-Pacific theater has become meaningful. It supports long-term growth and profitability,' Goldstein added. 'But in every scenario, the Caribbean still plays the leading role.'