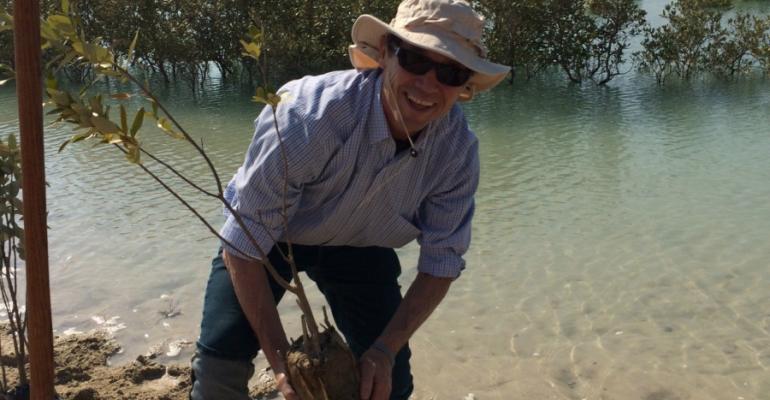 Sir Bani Yas, a desert island located off the shore of Abu Dhabi, is being touted as the Arabian Gulf’s newest cruise destination.

The island stretching 17.5km  from north to south and 9km wide is home to a large wildlife reserve, originally established by Sheikh Zayed Bin Sultan Al Nahyan in the mid-70s.

Abu Dhabi Ports Co hosted a group of cruise line planners attending Seatrade Middle East Cruise Forum in Oman at the end of the event for a one day site inspection to hear about the masterplan to create a tender stop for visiting cruise ships.

The vision is to take a 2.8km long and 90mtr wide spit in front of a mangrove lagoon and develop a beach experience with pontoon designed to accept up to three ship’s tenders at one end and to build a bridge linking the bar with the rest of the island at the other end.

It is envisaged within a year, cruise ships would anchor just off the spit where the water depth is 17mtr and tender passengers to the shore for a beach BBQ experience with tree-lined boardwalk and cabanas plus parking for vehicles to take them off to tours across the island.

Seabourn is one of the first cruise lines to include Sir Bani Yas on itineraries with two calls scheduled for late next year.

‘I believe it has phenomenal potential if it is able to deliver the proposed masterplan,’ commented director, deployment & itinerary planning Timothy Littley. He said, ‘it promises to be one of the most important new destinations in the region fulfilling the need for a beach destination in the Middle East.’

Noble Caledonia’s Island Sky is also scheduled to visit the island in November 2015 on an itinerary calling in Dubai, Abu Dhabi, Sharjah, Oman, Qatar, Bahrain and India. ‘I found it a very special place – one that under-promised and over-delivered and believe it will be a huge surprise for our passengers,’ fleet director Mike Deegan, told Seatrade Insider.

Also impressed with the destination was Adam Sharp, manager port operations & guest port services Europe, Royal Caribbean Cruises Ltd, particularly, he noted, once the airport gets international status which is planned for next year. ‘That will bring immigration officials here and allow flexibility in itinerary planning as currently ships would need to call either in Dubai or Abu Dhabi before or after Sir Bani Yas, he explained.