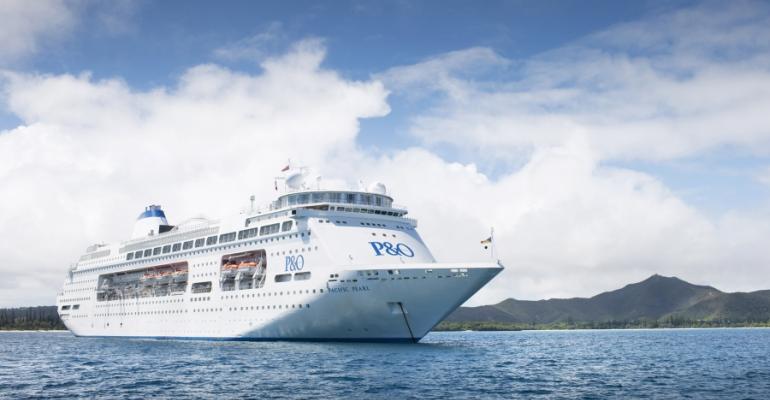 The mystery is over. British-based operator Cruise & Maritime Voyages is adding Pacific Pearl from P&O Cruises Australia to its fleet commencing cruise operations on June 9, 2017, as the renamed Columbus.

Seatrade Cruise News earlier reported a commercial arrangement had been reached to transfer Pacific Pearl in April 2017 but was told by P&O Cruises Australia the details were confidential.

Under CMV’s explorer theme, Columbus will be dedicated to the British cruise market homeporting year-round from London Tilbury.

Columbus will also be targeted to the adult only (16 years-plus) market although in 2017 will be operating two selected August summer holiday sailings for all age groups.

The ship was launched in 1989 and christened by Hollywood actress Audrey Hepburn.

Christian Verhounig, ceo and chairman of CMV, explained: 'The successful introduction of Magellan in 2015 has encouraged our group to accelerate their mid-term growth plans and the addition of Columbus to the fleet in 2017 is another important milestone in achieving our longer term growth objectives.'

He added: 'The strategic development of the group’s presence in the UK and wider international markets will increase our overall capacity to 125,000 passengers in 2017.

'We are proud of the CMV brand’s growing international recognition and remain confident in continuing to successfully build our business as a strong value-based "independent" alternative and deliver profitable returns for both our trading partners and stakeholders.'

Chris Coates, commercial director commented: 'We beleive this ship will be very well suited to our core British market who appreciate and value the many benefits of cruising on smaller to mid-sized more traditional vessels of this type.'

The vessel underwent an extensive refit in Sydney in August 2015. CMV said Columbus will undergo a dry dock with some refurbishment and re-livery works in Singapore in April and early May 2017 before positioning in ballast to the UK to commence her inaugural CMV ex-UK 2017 cruise season.

A gala trade launch event is planned in Tilbury for June 8, 2017.

Planned upgrade works include some refurbishment to the cabins and public areas plus conversion of the HQ Teen Center into the maritime-themed Columbus Lounge and Library situated aft and and conversion of the Shark Shack & Turtle Cove Children’s Center into Trumps & Aces, a dedicated Bridge & Card Room area and a separate Crafter’s Studio.

The introduction of Columbus and her past association and popularity with the British cruise market spanning 13 years, will increase 2017 UK bed night capacity by 25% to 95,000 passengers, Coates added. 'Having already sold over 85% of capacity for 2016 and with 17,000 people turning 50 every week in the UK, we remain confident that Columbus will satisfy the growing demand for our product,' he said.

The 2017 summer programme will go on sale via the travel trade and CMV website on March 31, 2016, and following the Easter holidays a special 2017 launch edition preview brochure will be released on April 7.

Special introductory fares with early booking deals will be on offer plus a 25% single supplement deal with the 150 dedicated single cabins being made available for the growing solo market.

Pacific Pearl’s final voyage for P&O will depart Auckland on March 27, 2017, for Singapore.