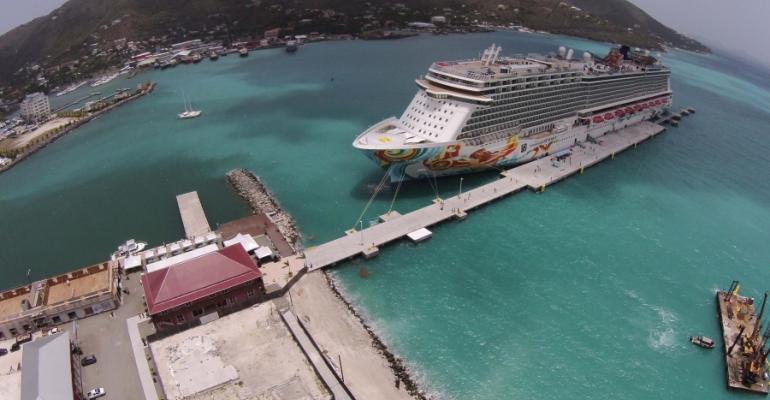 Norwegian Getaway alongside at the expanded pier, with the new Welcome Center at left

'A new era for tourism in the British Virgin Islands' was declared during festivities for the inaugural call of Norwegian Gem at Road Town, Tortola's newly expanded cruise pier.

Highlights of the April 29 event were captured in a newly posted video, including remarks by Gov. John S. Duncan, OBE. Officials from Disney Cruise Line and Norwegian Cruise Line Holdings, which have signed long-term agreements to use the facility, were on hand.

Representing Disney was Anthony Connelly, svp operations, while Colin Murphy, svp destination and port operations, was there for NCLH.

Duncan congratulated the BVI government for its efforts to complement the work of the private sector across the territory to 'refurbish and to renew the facilities we offer to visitors to ensure the British Virgin Islands remain a first-class tourist destination in the Caribbean.'

Duncan also stressed the importance of ensuring visitors have 'a unique BVI experience and that we promote what is unique about the British Virgin Islands,' including its art, culture and history.

'We have a unique product' but everyone—taxi drivers, shopkeepers, restaurateurs—needs to do their part to promote that, the governor said.

Premier Orlando Smith, OBE, called the construction of the pier and agreements with Disney and Norwegian 'a significant step forward' and urged continued training to prepare for new prospects in tourism.

'It's no longer about just sea, sun and sand,' Smith said.

His vision is for new attractions, reassessing services and a diverse supply of products and offerings.

'The new story to tell is that BVI is a magnet for new experiences.'

Though small, BVI can stand as a giant in many areas, including tourism, Smith added.

Besides the expanded pier, the Welcome Center, featuring the work of BVI artisans, is open. The full Tortola Pier Park landside development is scheduled to be completed by year's end, according to Mark Vanterpool, minister of communications and public works.

'It is no longer a high season or a slow season. For the first time in the history of these British Virgin Islands, we will have a 52-week-a-year cruise tourism.'