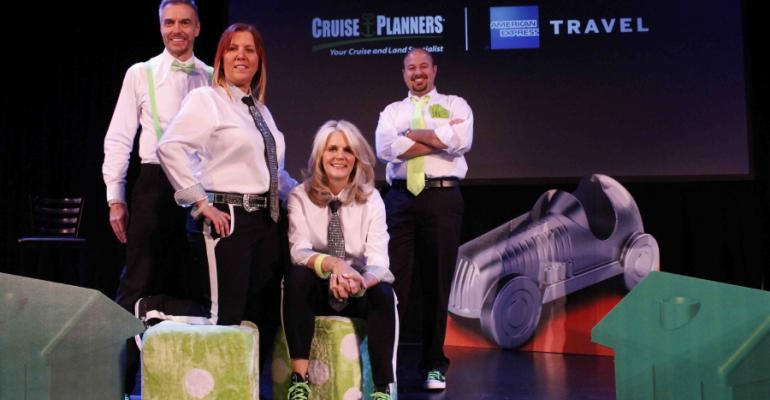 Cruise Planners leadership team at national convention in Atlantic City. From left, Tom Kruszewski, Vicky Garcia, Michelle Fee and Brian Shultz
Cruise sales revenues were up more than 16% in 2014 for Cruise Planners/American Express agents, who heard about a bevy of new sales and marketing tools, mobile apps and training programs Thursday at the kick-off of their national conference.

In a theatrical Atlantic City, N.J., setting with pounding music and glow sticks, Cruise Planners franchisees learned their sales performance was up across all categories and heard about a new top seller category: 'megastar.' They also cheered novel proprietary technology like a sales prospecting management tool, automatically triggered emails for booked clients to keep them engaged and the website addition of a virtual brochure rack.

In 2014, Cruise Planners' same store sales grew an average of 26% over 2013 and bookings increased an average of 44%—attributed to the giant home-based agent franchiser's programs and special deals available through preferred suppliers.

Cruise revenues represent 71% of the sales mix, while land sales comprise 20%—and both categories are growing.

The number of Cruise Planners franchises has increased, the management team said, without giving specifics.

A third category of top sellers was added—'megastars.' This is for agents with annual sales of $600,000 to $1m. Previously, there were two categories: rock star, which now means sales of $300,000 to $600,000, and millionaires. Fee said that in the last five years, the number of rock stars had more than doubled.

Brian Shultz, evp technology and operations, said Cruise Planners this year launched 87 technology enhancements. Website traffic has skyrocketed, and Fee said there has been a 'huge spike' in bookings on the eConnect booking engine, which soon will integrate hotel bookings via Orbitz. One plus of this will be expedited commission payments.

Agents applauded the new virtual brochure rack that will appear on their websites in December. It defaults to 18 brochures from a selection of more than 100, and agents can add whatever they like as well as email them to clients.

Mobile technology has been a big focus, particularly since it's the way to engage with millennials, whose purchasing power is rapidly overtaking baby boomers, Fee said. A new version of CP Mobile will go live soon with features like photo albums where clients can upload and share pictures from their trips on Facebook, Twitter or directly.

The new CP Hub will help agents manage their sales prospects, with features such as the ability to organize clients by travel type, reminders about follow-ups on quotes and a range of other tools to help sales in the pipeline, according to chief operating officer Vicky Garcia.

New triggered emails will 'make clients think you're thinking of them through the entire process,' Fee said.

For example, clients get a thank you message after booking, and those who book more than six months out get a 'touching base' note advising of options like pre-/post-cruise add-ons—unless they've already booked those, in which case the pre-/post- option is auto-removed. There's a mail after final payment including a link to the supplier's online check-in site, and a 'bon voyage' note offers the nifty ability for the client to upload their passport to a protected vault plus a reminder to book a future cruise on board—'a win-win for all of us,' Fee said, since the credit goes to the agent.

'If they're engaged with you, they won't book down the street because it's $10 cheaper,' Garcia added.

Cruise Planners held eight regional 'boot camps' in cities from New York to Los Angeles, and two in the Florida home office during the first half of 2014. Some 602 agents participated. Further boot camps are scheduled in 2015. And 362 agents took part in preferred suppliers' familiarization trips. During the year there were 23,000 webinar attendees, up 6,000 from 2013. One of the most-requested topics, social media training, will get a boost with new webinars by an outside expert, Sophie Bujold.

The revenues of Cruise Planners franchisees who engage associates are three times higher, so the company introduced changes that facilitate that program. And the 18-year-old Cruise Planners magazine has been revamped and renamed 'The Travel Planner' with exclusive offers for clients. Garcia urged agents to take advantage of that low-cost way of engaging customers.

After the land-based portion of the Cruise Planners national conference in Atlantic City, attendees are scheduled to sail Sunday aboard a Quantum of the Seas preview cruise.