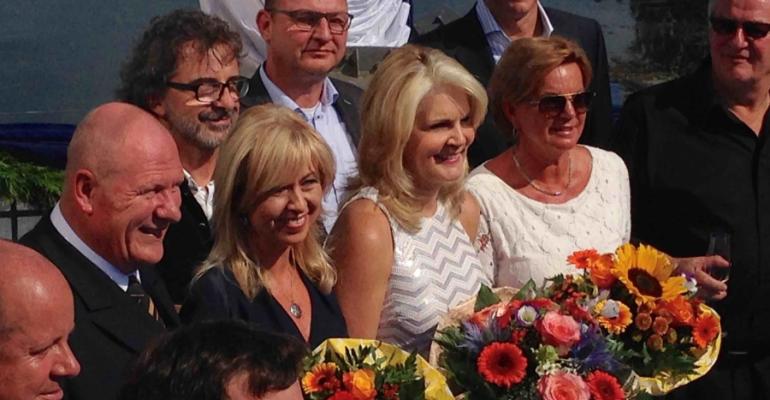 Vilshofen's mayor, beer queen and townsfolk were on hand for the Bavarian-style festivities as the local abbot sprinkled holy water on AmaSerena before Fee officially named the vessel.

It was the sixth AmaWaterways ship christened in this charming town near Munich, and company co-founder Rudi Schreiner indicated AmaViola would likely be named in Vilshofen in 2016, continuing the tradition.

'It is always a pleasure to come to Vilshofen,' Schreiner said, adding that the town presents a mini-Oktoberfest for every Ama ship call.

A brass band from ashore got things rollicking on AmaSerena's top deck as the vessel sailed in for the festivities, and giant gold and blue crowns decked the gangway. A singer performed the specially composed 'AmaSerena, Pearl of the Danube.' A tent pierside served beer, wursts and sauerkraut, and waiters circulated with flutes of Veuve Clicquot.

'Who could imagine doing anything else but selling people's dreams?' said Fee, a 34-year travel industry veteran. 'Today I feel like the luckiest person, representing all Cruise Planners agents. The ship is actually being christened by the Cruise Planners family.'

Fee called AmaWaterways 'exemplary' in the travel industry, and praised Schreiner, co-founder Kristin Karst and all the staff and crew who deliver such a quality river-cruise experience.

Fee sailed the Danube to Vilshofen aboard her new ship with her husband Mark, daughter Montana and sister-in-law Jane. They attended the festivities, along with all the AmaSerena passengers.

'We don't take for granted that a worldwide company says hello and goodbye to its passengers in Vilshofen,' Mayor Florian Gams said. He added that Vilshofen is busy installing its third docking spot to better serve river vessels.

The godmother, Schreiner and Karst were invited to sign the town's Golden Book, and AmaSerena Capt. Jan de Bruijn was presented with a banner.

'What an incredible feeling!' Fee told Seatrade Cruise News after the naming. 'I kept pinching myself that in my lifetime I would get to experience something so wonderful.

'Rudi Schreiner and Kristin Karst are amazing people,' Fee added, 'and AmaSerena is magnificent. She is now my favorite ship at sea.'