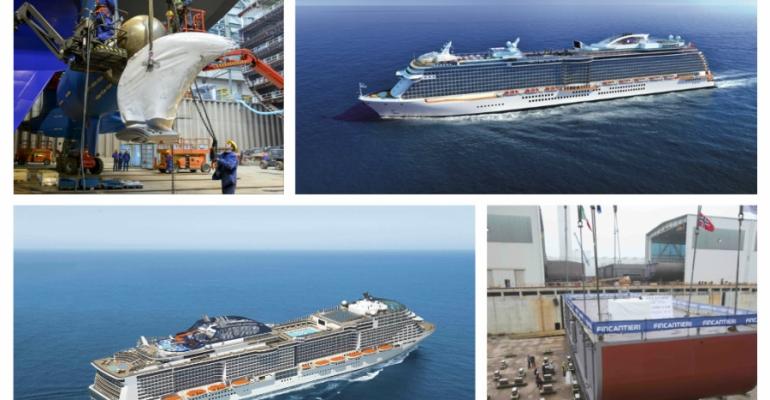 Friday update: Today's delivery of Ovation of the Seas reduces the orderbook to 58 ships. The cruise ship orderbook has reached a historic high in value, $42bn, with 178,650 lower berths on 59 ocean-going vessels, according to Seatrade calculations. These address firm orders to 2024 and include estimates* for some data not yet available or not disclosed by the lines.

Counting options, the orders stretch further than ever, with MSC Cruises' 'World Class' quartet pushing deliveries into 2026. Before this, the furthest out had been Disney Cruise Line with a 2023 delivery.

MSC is flexing its muscles, with 11 newbuilds planned (eight of those firm, plus three options). And Genting Hong Kong is energized, building for its new Dream Cruises brand (two ships) and for recent acquisition Crystal (four for the oceans), acquiring shipyards in Germany to accomplish the latter.

Even brands that, until now, have used pre-owned tonnage—P&O Cruises Australia and Saga—are building.

Three of the four major corporations continue measured growth strategies. Carnival Corp. & plc currently has 16 firm contracts for deliveries through 2020 (four for Costa/Costa Asia, three each for Princess Cruises and AIDA, two each for Carnival Cruise Line and Seabourn, and one each for Holland America Line and P&O Cruises Australia).

Viking and TUI each have four more coming, Ponant plans four, Virgin has three, Disney two and Silversea one (with options for two more).

In an orderbook analysis for Seatrade Cruise Review's March issue, Tony Peisley noted that in each of the 1990s and the 2000s decades, 100 ships were delivered. For 2011-2020, the way things stand now, 88 will be delivered by his calculations. There may be fewer ships, but the ones now are bigger.

And there's time still for a couple more to be added. However, building slots at the leading yards are getting tight.

'The 180,000 would be a record in itself as a total on order at any one time in industry history but, with the extended delivery times, the 200,000-plus figure is unprecedented,' he said.

The yards are very busy.

Fincantieri is building cruise ships at its four main facilities, Meyer Werft and Meyer Turku are bustling, and STX France got a hefty boost from the MSC business just announced. Besides Genting HK buying Lloyd Werft and Nordic Yards with its three German locations, Fincantieri had to recruit its Norwegian subsidiary, Vard, to handle the order for the four Ponant ships. Scenic and Star Clippers went to Croatia to build their specialized vessels.

Much could happen in China, where there are differing views on the timeline for domestically built ships, but Peisley said Carnival Corp. has suggested that, within 10 years, it could be operating five vessels built in China, albeit with substantial European input.

Another noteworthy fact about the orderbook is that eight major newbuilds are to be LNG-powered (two Costa, two AIDA and up to four MSC).

* Figures for Scenic, Disney, Crystal, Viking and Virgin prices, among others, are estimates, as are the delivery dates for Crystal's second two Executive Class ships.