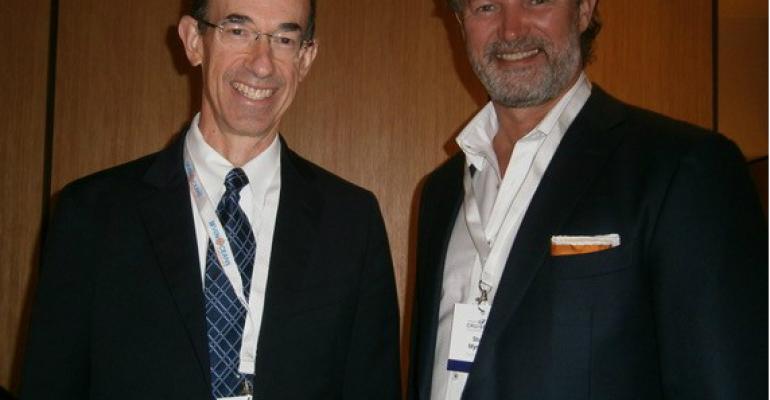 CLIA Global Chairman, Adam Goldstein, left, and CLIA Australasia Chairman Sture Myrmell at Cruise360
A record number of more than 600 delegates — including around 70 from New Zealand — attended the sixth annual Cruise360 Australasia conference at the Hyatt Regency Sydney on Friday.

On the previous day, delegates toured Princess Cruises’ Sea Princess and had lunch on board.

Joel Katz, CLIA Australasia and Asia MD, told delegates that Cruise360 2020 will be held in Brisbane on August 28 next year, the first time it has been held outside of Sydney.

Katz said it recognises Brisbane as a leading port in Australia, with the new world-class Brisbane International Cruise Terminal, a 15-minute drive from Brisbane Airport, opening that year.

Guest speaker Tom McAlpin, president & CEO of Virgin Voyages, announced that Travel the World has been appointed its GSA in Australia.

McAlpin said over the coming months Travel the World will focus on training and registering travel advisors, or first mates, to do business with Virgin Voyages and that officially business will open with the Australian travel community at the end of the year.

In welcoming delegates to Cruise360, with the theme #WeAreCruise which will continue during cruise month in October, CLIA Australasia chairman Sture Myrmell said 80% of cruisers use a travel agent and that recent research shows those who choose an agent are more satisfied than those who don’t.

Ellen Bettridge, president & CEO of Uniworld Boutique River Cruise Collection, said Generation Z take 2.8 leisure trips a year and that travel agents should connect with Instagram to see what they are looking for and what they like.