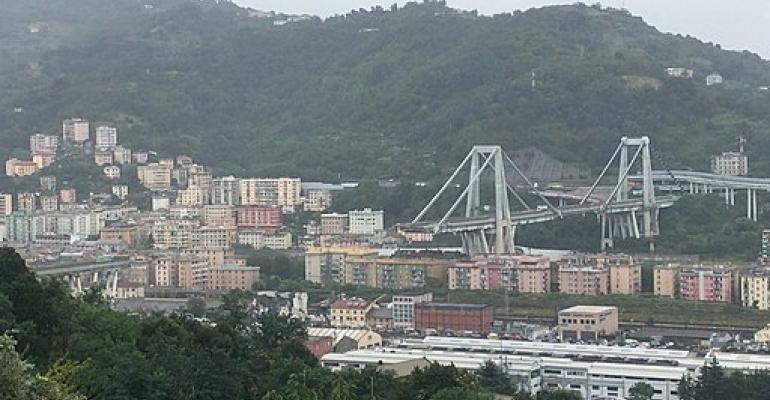 The Morandi Bridge on highway A10 crumbled at a trestle supporting concrete stays
The collapse of a highway bridge in the heart of Genoa on Tuesday killed 37 people. It also touched the cruise world, since Genoa is the home of Costa Cruises, and Stazioni Marittime is among the Mediterranean's busiest ports.

Costa spokesman Gabriele Baroni told Seatrade Cruise News no employees were involved, 'but we are deeply touched by what happened.' He added: 'Costa Crociere is close to all the families and people involved in this tragic accident.'

Just last month Costa had turned the city into a party to celebrate the company's 70th anniversary, with maritime flags festooning the downtown, a 340-meter inflatable waterslide set up on the Via XX Settembre, children's activities and free concerts stretching until late in the night. The company has initiated a project to develop a new cruise terminal in Genoa.

Costa ships currently sail from nearby Savona, and operations for the next cruises there are confirmed. A Saturday call is expected to go ahead as usual. Costa is alerting passengers that traffic on the way to Savona might be affected by the bridge collapse on highway A10.

MSC Cruises, the main customer at Stazioni Marittime, where MSC Seaview was named at festivities in June, also expressed deep sadness over the bridge incident.

'The collapsing of the Morandi Bridge is a tragedy and our thoughts go out to the victims, their families and loved ones as well as to the entire city of Genoa,' a spokeswoman said.

She added that MSC Cruises is continuously monitoring the situation on site and is in close contact with the local authorities, ground service operators and colleagues in Genoa.

Calls this weekend—MSC Opera and MSC Divina on Saturday and MSC Fantasia and MSC Seaview on Sunday—are expected to take place as planned.

MSC's shore excursions in and around Genoa this weekend—mostly to Portofino and in town—are currently not affected.

Passengers traveling by road are being advised to plan additional time. Alternative routes are available, though traffic delays are likely on surrounding highways. 'We are advising to take an additional two hours of travel time into account,' the spokeswoman said.

'We will keep our guests informed either directly or via our trade partners. We will also provide regular updates via our website www.msccruises.com,' she added.