Cruising in the Arabian Gulf comes of age 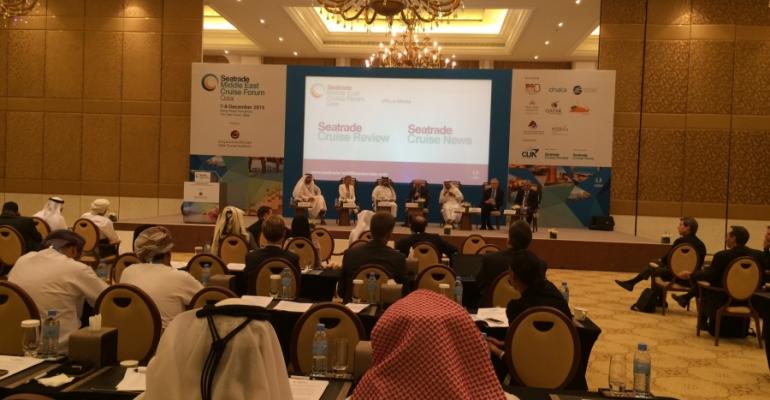 Delegates heard the Middle East cruise industry continues its remarkable growth story: in just over a decade the Arabian Gulf has expanded to become the third most popular winter cruising destination with one million cruise passenger visits expected in GCC countries during the 2015/16 season. Seven ships are homeporting in the region this winter, rising to nine in 2016/17.

Collaboration between regional destinations, cruise lines and the many stakeholders has played a major part in the success story so far. Membership of the Cruise Arabia alliance, founded three years ago, has grown from three to six GCC countries with Bahrain becoming the latest entrant(see separate story).

Major port infrastructure is underway to meet future demand: Doha is building a huge port complex including plans for a dedicated cruise facility at Hamad Port, 25km from the city, whilst the city-centre Doha Port is being converted into a dedicated passenger facility.

Cruise lines applauded the exceptional port facilities that have either been built or are at planning stage but stressed that whilst design and architectural excellence provided a ‘good look’ it is important the facilities are functional and operate efficiently.

The issue of immigration and visa processes was discussed also. Cruise lines urged Qatar to follow Oman’s example and introduce a 48-hour visa waiver for visiting cruise passengers. Currently Qatar operates an on-arrival visa for visitors but TUI Cruises’ director port operations, Tine Olemann said German passengers  do not require a visa to visit any other GCC country and warned it might be  a reason ‘not to put Qatar on the map’.

Cruise lines would like to see a ‘Cruise Arabia’ multiple entry visa valid for the duration of a cruise.  More relaxed visa options for cruise passengers, like the multiple entry visa for the UAE introduced last August, is assisting in opening up the region for emerging source markets such as India and China, remarked Hamad Mohammed bin Mejren, svp department of tourism & commerce marketing Dubai Tourism.

Panellists agreed the general feeling amongst passengers who visit the Arabian Gulf it is a safe area with tight security and they are good ambassadors for the region.

Stephen Young, director port services and govt, affairs Carnival UK advised, ‘it is important that ports not only have the right security equipment and sufficient levels of staff to operate it but the correct procedures and processes are in place.’

Dubai is targeting 20m tourists by 2020, of which 1 million will be cruise passengers,’ said bin Mejren. ‘Cruise Arabia is expanding and I believe this region has a bright future.’

Chris Coates commercial director, Cruise & Maritime Voyages, which has one call in Salalah, Oman in 2017 as part of Magellan’s world cruise did not discount future homeporting operations. ‘The Middle East is a strong contender for deployment in the future and as we grow we need to study fly-cruise options,’ he remarked. ‘Proximity to the UK is attractive, the airlift is good, and winter sunshine is a big appeal for our passengers.’

The cruise season is extending, in many cases running for eight months from October to May, but whilst Dubai is a year-round land destination with numerous climate-controlled products to counter the hot summer months, panellists did not feel there was a market yet for year-round Gulf cruising.

As visiting ships get larger Capt Luigi Pastena, manager and port captain MSC Cruises which will bring 1 million passengers to the Arabian Gulf between 2015-18, expressed concerns that whilst Dubai, Abu Dhabi and Doha, have or are planning berths to receive  these ships, congestion problems are starting to emerge at some of the smaller destinations which have limited berthing.

The short distances between Gulf ports may help slower speeding and keep fuel costs down but sometimes the ships are not travelling fast enough to make fresh water onboard, Pastena lamented.

On the question of potential to sell cruises to GCC nationals on ex-Dubai/Abu Dhabi cruises, Rahed Al Qurese, chief marketing officer at Qatar Tourism Authority said, ‘people from GCC are world travellers  with disposable incomes seeking new opportunities and I believe there is a huge opportunity with the right product and right messaging.’ Bin Mejren who has led Cruise Arabioa roadshows around the region raising awareness of cruising as a vacation said, ‘we have a big job to do here to convey cruising in the Gulf.’

Royal Caribbean has had success in bringing GCC national groups onto its ships especially as family units booking multiple cabins and suites but Adam Sharp, head of port ops Northern Europe and Middle East for Royal Caribbean Cruises Ltd. noted there are far greater numbers  cruising in the Med on our ships than locally.

On other source markets Bin Mejren said DTCM has 22 offices around the world, including four in China, ‘so you can expect to see Chinese cruising out of Dubai in near future.’

Mike Pawlus director strategic itinerary & destination planning,  Azamara Club Cruises recalled when Dubai exhibited at  Seatrade Miami in 1999 he didn’t know where it was. He has watched the region’s development with a keen eye sending many ships to the Gulf in the past 15 years  and praised the diversity of the shorex now being developed. ‘27 calls at Abu Dhabi’s Sir Bani Yas island beach and safari experience  next year shows the scale and demand for new product as this was only launched last year.’

Jim Droney vp port ops and itinerary planning, The World also praised the great strides being taken on product development and plans for the future: ‘The World will be returning to the Arabian Gulf for a five centre stay in October 2016 as it is hugely popular with our residents.’

Passengers buying on-line tours from third party operators is regularly cited as an issue in destinations around the world but John Stoll, vp land programs Crystal Cruises noted  ‘it is not as big here than in the Caribbean for example.’

Important was placed on each destination having its own distinct offer and variety of shorex to match the changing demographics of cruising. ‘Every city has a souk but each offers a different experience but the challenge is in delivering that message,’ said Khalid al Zadjali, director tourism events Oman’s Ministry of Tourism.