Cruising's clout in the Americas is strong and growing, DC diplomats are told 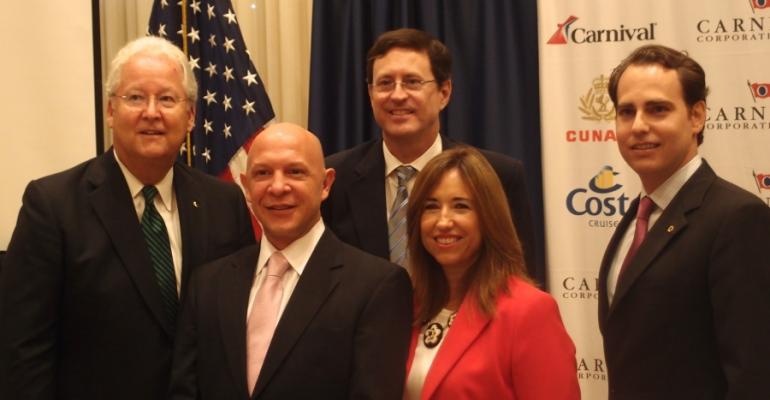 At the National Press Club - from left, Carnival's Tom Dow, Jorge Durán of the Organization of American States, Costa Rica's ambassador to the US Román Macaya, CLIA's Christine Duffy and Carnival's David Candib

China, Australia and Europe are getting a lot of the cruise business's attention these days. But hundreds of millions of dollars are pouring into major new developments in the Americas, where cruising is still important and growing.

Diplomats and tourism leaders from across the Americas heard about huge infrastructure investments in places like the Dominican Republic, Cozumel and Haiti during a breakfast hosted by Carnival Corp. & plc at the National Press Club on Thursday.

An $85m joint venture to create Amber Cove in the Dominican Republic, a potential $70m investment in Haiti's Tortuga, $90m in Cozumel where a third pier is due for completion next fall, $55m at Grand Turk where a downtown welcome center is expected to join the facilities next year, a $70m joint venture in Roatán's Mahogany Bay.

At Carnival's Puerta Maya in Cozumel, for example, 1.5m passengers visit annually from 24 ships for six brands. Sixty-five people are employed directly and more than 1,100 indirectly. 2014 economic impact is projected as nearly $342m. These numbers should swell when the third berth comes on line.

'We are an economic contributor and an important one in the Americas,' Christine Duffy, president and ceo of Cruise Lines International Association, told them. Last year, in the US alone, cruising had a record $44bn impact and supported 363,133 US jobs. The Caribbean accounted for 34% of global itineraries, expected to rise to 37% this year, and crew and passenger spending poured $1.7bn into the region, she said.

'This is a good record of success, but we have a lot of opportunity ahead,' Duffy added, noting that only 3.5% of the US public cruises. CLIA estimates a potential market of 39m, with huge opportunities among the 95m-strong millennials and multigenerational groups.

In the first time Carnival has held an event at the National Press Club, the world's largest cruise company was addressing a key audience, according to Tom Dow, vp public affairs.

'There is so much focus on global expansion, which is very important, but this is a good opportunity to focus on the Americas and to remind them there are still a lot of opportunities here,' Dow told Seatrade Insider.

For countries like the Dominican Republic, Honduras and Mexico—to name a few—the cruise business is 'very, very important to their local economies ... and they're very close to where a good number of ships are homeported. That doesn't take anything away from Europe, the Mediterranean, Australia and Asia—everywhere you look, there's important growth,' Dow added.

'The industry has a key stake in the development of the region,' agreed Jorge Durán, chief of the Inter-American Committee on Ports, Secretariat for Integral Development for the Organization of American States.

'An event like this, where the industry takes the initiative of informing the government officials of what they're doing, is critical,' Durán said. 'It's a good idea, but they need to repeat it, keep it going.'