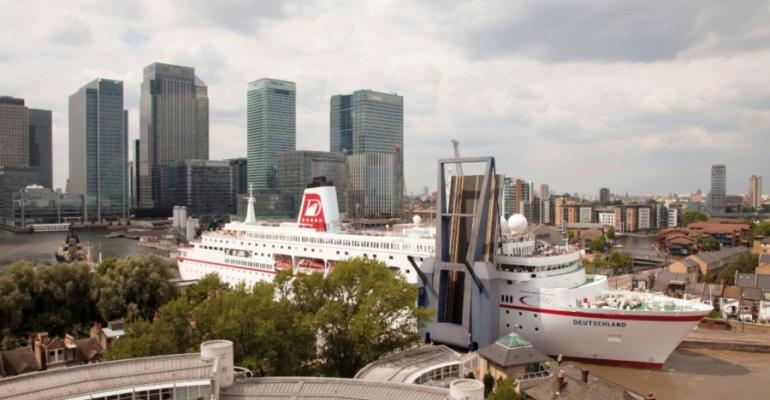 Deutschland - an MOU with an unnamed party has been confirmed by the insolvency administrator. Crystal Cruises said it is not the buyer

Crystal Cruises on Saturday denied reports in the German media that it is acquiring Reederei Peter Deilmann and the Deutschland for a total price of €50m, with the deal to be finalized next week.

'Crystal Cruises is not the buyer,' president Edie Rodriguez told Seatrade Insider in an email. Nor is Crystal's parent, NYK, associated with such a purchase, she said.

Meanwhile, German media have continued to circulate the story, and an additional unconfirmed tidbit: that Crystal would announce a newbuild.

Over the weekend the spokesman for the administrator of 'Deutschland' Beteiligungsgesellschaft told Seatrade Insider there is a memorandum of understanding with one party. He would not identify the party and said an MOU is different from a sale. He added it is hoped for a sale in the near term.

Deutschland has been out of operation since November and is currently idle off Gibraltar. The ship's planned overhaul in Cadiz has not taken place and the world voyage, scheduled to start Dec. 18, was canceled in late November.

Reinhold Schmid-Sperber, who acted as provisional insolvency administrator, was formally appointed administrator of 'Deutschland' Beteiligungsgesellschaft and Reederei Peter Deilmann by the Eutin District Court on Jan. 1. He is overseeing the insolvency proceedings for both companies. A creditors' assembly is to take place in Eutin on Feb. 20.

'Deutschland' Beteiligungsgesellschaft and Reederei Peter Deilmann are estimated to have total debts of around €62m, with Deutschland alone having racked up approximately 1,500 creditors. According to the administrator, contracts with the ship's crew and the shore staff are continuing until further notice, and salaries have been paid as usual.