Crystal Esprit is named in the Seychelles 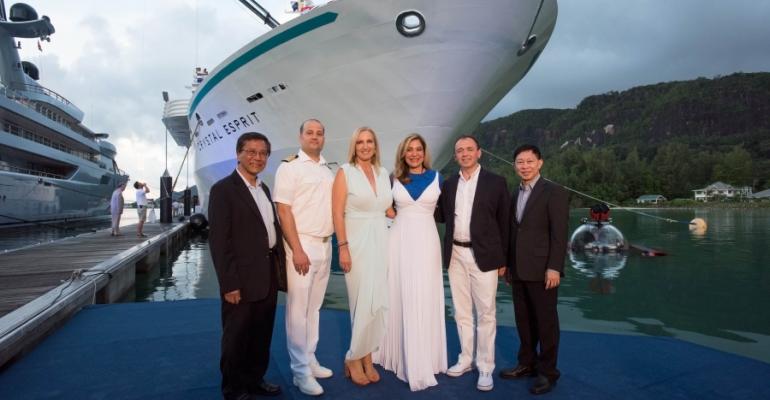 Crystal Esprit was officially welcomed into the Crystal Cruises fleet during a naming ceremony in the Seychelles on Sunday when the ship's godmother, Lady Gaenor Anne Meakes, broke a bottle of Louis Roederer, Cristal Brut, 2004, against the hull. The evening culminated with fireworks at sea.

Meakes is the fiancée of Mark Richards, one of the world’s most awarded yachtsmen and chief executive of Australia-based Grand Banks yachts. He is an eight-time champion skipper of the 628-mile Sydney-to-Hobart yacht race.

'Since joining Crystal just over two years ago, a personal goal of mine has been to see Crystal realize the next step in continuing to pioneer luxury travel and hospitality, and today I am seeing that dream fulfilled,' Crystal president and ceo Edie Rodriguez said. She thanked Genting HK ceo and chairman Tan Sri Lim Kok Thay for support of her vision for Crystal.

The line is poised to launch Crystal River Cruises in 2016 and 2017, with five luxury river yachts in Europe. Crystal Luxury Air will take off with all-first-class outfitted Boeing 777-200LR and Boeing 787 Dreamliner taking travelers on multi-week journeys to far-off destinations not typically served non-stop by major airlines.