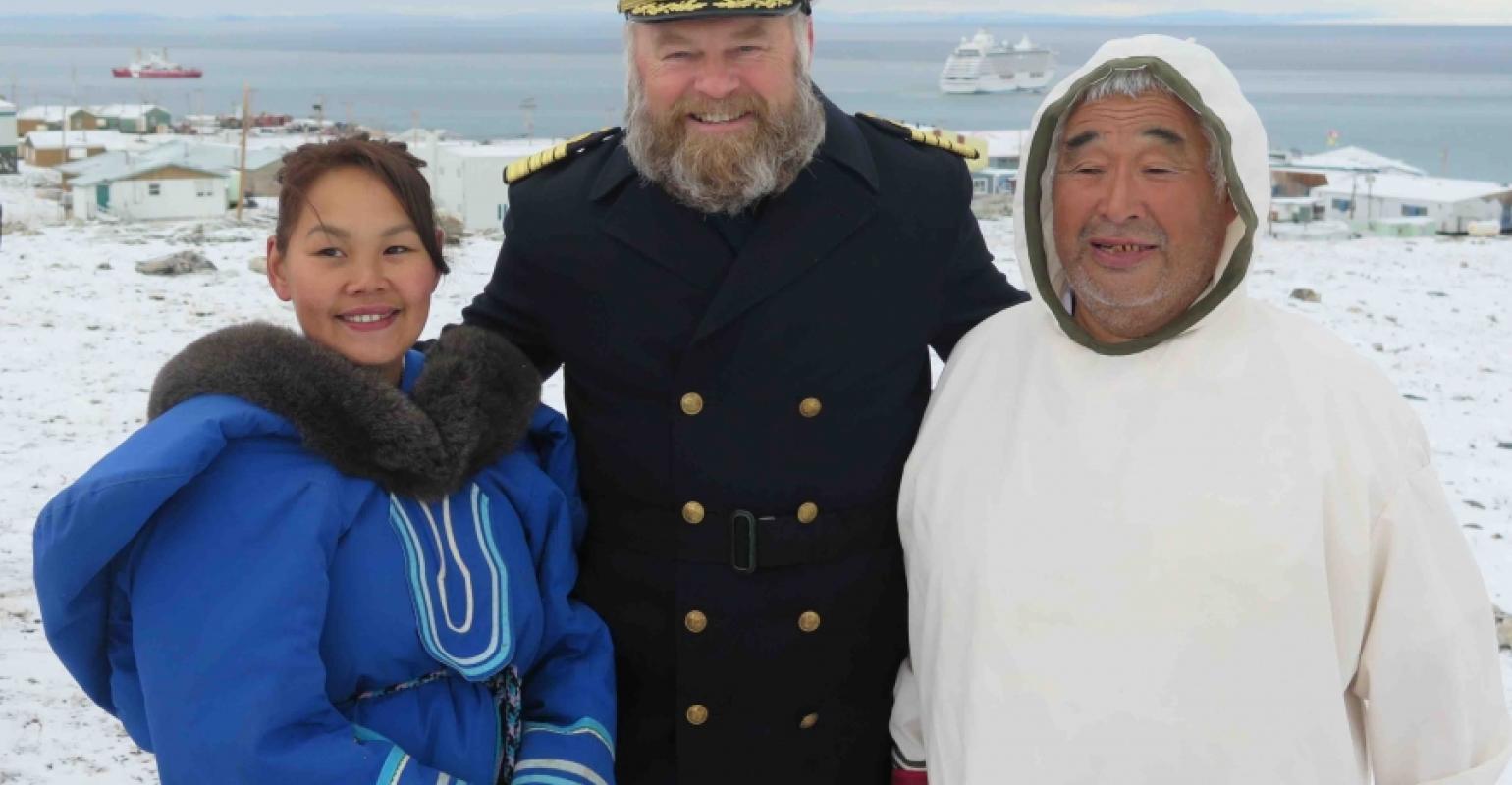 At 72 degrees N, atop Contemplation Hill, the captain presented the community with a signpost showing distances—3,149 km to Anchorage (near where Crystal Cruises' historic Northwest Passage voyage began, at Seward), 4,870 km to Los Angeles, 14,874 km to Sydney, 18,071 km to the South Pole, and so on.

'We're delighted to be here,' Capt. Vorland said, adding that the gift showed Crystal's appreciation for the maiden call as part of a voyage almost four years in the making.

Mayor Charlie Innuakak noted Pond Inlet welcomes more cruise ships than anywhere else in Nunavut though it 'lacks infrastructure like a proper dock.' As at other Arctic stops, Crystal Serenity passengers wore rubber boots to make wet landings from Zodiacs, helped by crew and expedition leaders.

The mayor presented Capt. Vorland with a pastel sketch of a hunting scene and a handcrafted sealskin model of a kayak. Both drew 'ahhs' from the small crowd at the dedication.

Andrew Orawiec of the tourism and culture division of the government of Nunavut was among those on hand. 'It's the day we've been dreaming of,' he told Seatrade Cruise News about Crystal Serenity's arrival.

Pond Inlet, an Inuit community, is visited by 10 to 15 expedition vessels a year, said Orawiec, whose focus is sustainable Arctic tourism. But not all ships work with communities the way Crystal has.

'From the government's perspective, this is setting a new bar that others should aspire to,' Orawiec said. 'Some other companies ask if they can offload waste, which up here goes to a dump. We have our own challenges with waste. The fact that Crystal is anticipating this is setting a new standard.'

Crystal Serenity didn't leave waste anywhere in the Arctic. The ship installed innovative solid waste treatment systems and burned only low-sulfur fuel in the Northwest Passage. That's not a regulatory requirement, but a voluntary company decision.

While Orawiec didn't want to speak for the Inuit community, his perception is that most people welcomed the Crystal call. 'The occasional loud voice is heard more than the silent majority,' he said of some initial overseas media criticism, adding that cruise ships in general need to do more to cement their license to operate in the Arctic, as Crystal has done.

Proper notification of visits would be a start. Surprisingly, some expedition ships just show up without asking the communities' permission.

Joe Enook, a Nunavut Parliamentarian, has mixed feelings about cruise ships because the north is so fragile. 'I enjoy showing Nunavut's wonders to visitors, but we'd better be sure we're doing it right,' he said.

A must, in his view, is that tourism benefits the communities.

That's something Crystal takes seriously. In Pond Inlet, Enook was happy for the line's presentation of the signpost.

At its Northwest Passage stops, Crystal Serenity has donated money to community causes, delivered significant quantities of school supplies and hired as many local people as possible. Some traveled as part of the expedition team aboard ship, including a Pond Inlet woman, Leslie Qammaniq, who briefed passengers on how people live—many are subsistence hunters while others own dog teams—and how food like caribou, seal, Arctic char and narwhal is shared.

Crystal passengers have been spending tens of thousands of dollars on art and handicrafts at each port—just the kind of commerce that sustains traditional culture.

The local news stories have been positive, noting how the communities enjoyed sharing their traditions and interacting with the visitors.

According to the Nunavut News/North, passengers left an estimated $120,000 in Cambridge Bay (population 1,600). Local officials said the Crystal visitors went ashore in small, organized groups and the town was 'not overpopulated at all.'

Passengers who wanted to alight anywhere in the Northwest Passage were required to attend a thorough briefing and had to sign up for community visits at set times. These ensured not more than 150 to 200 people were on the ground at a time.

Knowing that not all Arctic communities perceive cruise ships as a positive, Crystal's partners, Expedition Voyage Consultants, devoted special focus there, ceo Ben Lyons said. This included town hall meetings and visits to elders and hunting and fishing associations. They heard the communities' concerns, and got their written approval for visits even before the Northwest Passage voyage was announced.

'We've done our due diligence with every government agency and every local community, not only following the guidelines and regulations but exceeding them,' said John Stoll, vp land programs and Crystal's Northwest Passage project manager.

He called the journey one of the most successful things Crystal has ever done.

In the Northwest Territories and Nunavut, Crystal Serenity was enthusiastically welcomed by Inuit communities who performed traditional throat singing, drum dances and competitive athletic feats, and demonstrated skills like seal skinning, stitching garments from skins, bone carving and much more.

Passengers have been dazzled by seeing polar bears but they've also raved about the community visits.

One high point for Janice Starsnic, a retired doctor from Pennsylvania, was getting to know places like Ulukhaktok, 'authentic and completely unaffected by tourism.'

To help plan and execute its journey, Crystal hired Expedition Voyage Consultants, a respected company headed by expedition leader Tim Soper, with two decades of polar experience, and Ben Lyons, who holds an unlimited master's license and previously served as a captain for Lindblad Expeditions and a deck officer aboard Queen Mary 2.

Even the Zodiac drivers had impressive pedigrees. Skip Novak, for one, is a sailing star and polar expedition ship builder who's led or participated in four Whitbread Round the World Yacht Races.

Passengers got daily expedition briefings and flocked to multiple lectures a day about topics ranging from early explorers to the tiny planktonic creatures in the polar waters all around them that could spark great leaps in medicine and technology.

'We were so impressed by Crystal's genuine desire to do it right in all aspects and listen to our suggestions,' Lyons said. A key part was ensuring communities weren't overwhelmed.

'It should be a pleasant experience for the guests and the community. There was lots of interaction. People were not herded. They blended into the towns.'

'We're very pleased with how it's gone,' Tim Soper said of the whole trip. 'It shows how proper planning and preparation make all the difference. Crystal's allocated the proper resources to make it safe and in accordance with the people's desires here in the Arctic.'