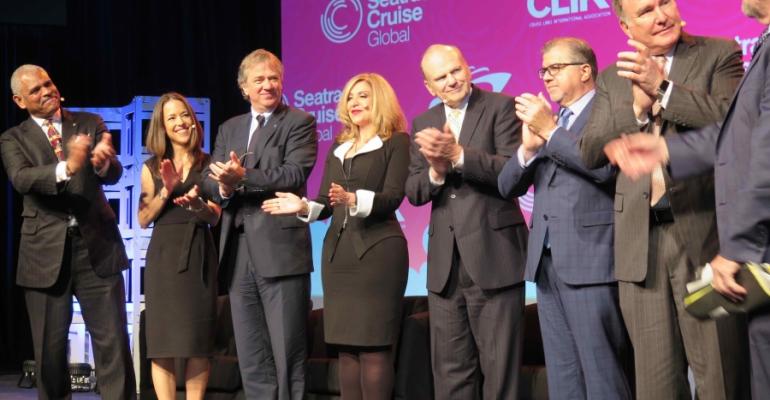 Innovation—and how creativity fuels the future of on-board experiences and yields—was a theme of Seatrade Cruise Global's “State of the Global Cruise Industry” panel on Tuesday. The “Two Cs”—Cuba, and its impact on the Caribbean, and China—also were discussed.

“Creativity is coming up with great ideas. Innovation is bringing great ideas to life,” said Richard Fain, chairman and ceo, Royal Caribbean Cruises Ltd. “I don’t think innovation has anything to do with size.”

With physically challenging attractions such as rock-climbing, the “truth is most of our guests can’t climb to the top of the rock wall. Most of our guests don’t do it, but they want the option,” Fain said. “It helps redefine us.”

“We can only grow so fast because we can only build so many ships,” Donald said. “To innovate is to think outside the box. It’s how you convert thinking into the experience.

“Innovation must also be the experience,” Vago said, citing the addition of a new custom entertainment lounge in collaboration with Cirque du Soleil, on MSC Meraviglia in July 2017.

To innovate, Norwegian Cruise Line Holdings Ltd. is pouring more than $400m into its "The Norwegian Edge" program on ship refurbishments, private islands and upgraded service and culinary standards.

“You’ll see a more balanced approach. We need to grow yield more than anything else with existing ships,” said Frank Del Rio, Norwegian’s president and ceo.

Innovation remains a lure for those who haven't cruised.

“A lot of what we do is posture the industry,” Fain added, referring to that challenge of recruiting “new to cruise” travelers.

Regarding Cuba, none of the US operators that want to go have permits from Cuban authorities, but they remain hopeful—with Carnival Corp.'s Fathom brand, for one, scheduled to sail from Miami to Cuba in May.

MSC Cruises, which already serves the island, will add a second ship, MSC Armonia, in November to meet increasing demand and, Vago announced, plans to go year-round there.

Because of its size and still-limited infrastructure, Cuba won’t divert that many passengers from other Caribbean destinations, Fain said. “Instead, it creates a halo of interest for all the Caribbean."

Indeed, the Western Caribbean will benefit from Cuba’s anticipated passengers, Del Rio said. “It’s a slow rolling start, but it will shine a bright light.”

Carnival’s Donald agreed. “Cuba’s a great refresher for the Caribbean. It’s going to be a great expansion.”

Of China's 135m outbound tourists, cruising captures only an "infinitestimal" amount, Donald said. "We can only grow so fast because we can only build so many ships," he added.

Princess Cruises, Norwegian Cruise Line and Costa Asia are among those buliding ships for the Chinese market.

A separate set of panelists discussed opportunities and challenges for their smaller lines during a second State of the Industry panel, part of a new format for Seatrade Cruise Global.

“We promise a lot, deliver more. We live in evolutionary times,” Rodriguez said, when travelers are more active. “Today’s 70 is the new 45 who think they’re 18," she quipped.

“We want to go deep in one place,” Russell said. “We have people with a fresh new set of eyes.”

Today’s traveling consumers are frugal with spending. “The new psychology is ‘I don’t want to overpay,’“ Yesawich said.

Forty-four percent of traveling consumers get trip inspirations from online communities, while 42% get ideas from friends and family.

In related news, CLIA projects 24m passengers for 2016, an increase of 68% in the last decade, with average daily on-board spending of $135 per passenger.