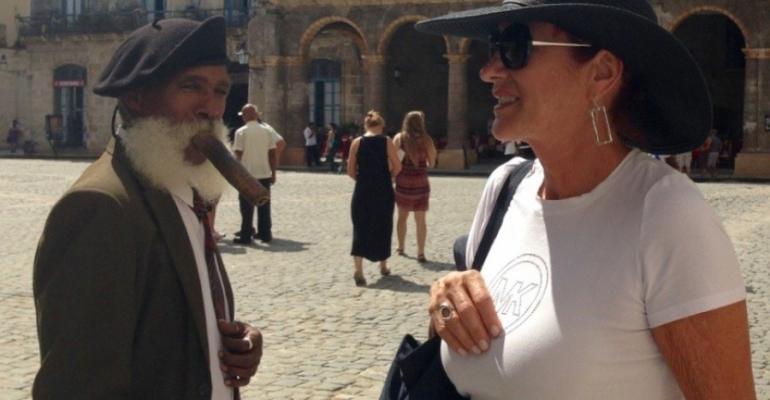 'Right now Cuba is a wonderful destination. If you want to experience the true Cuba, now is the time to go, in the next two years,' Conroy said, adding that whenever the US embargo ends, the big hotels and McDonalds will flood in, and things will change.

The Cubans' standard of living may improve but, from a tourist's standpoint, much will be lost—like, perhaps, the vintage cars that now fill the streets.

Now the people are 'not jaded, friendly, outgoing. They want to interact with you. They appreciate you,' Conroy said.

Having taken the lead on Cuba at David Morris International, Conroy clearly relishes the island and its culture.

Doing business in Cuba is a challenge but worth it because of the extraordinary experiences and people, she told Seatrade Cruise News.

'No, you still can't use your credit card,' Conroy said. But US citizens can now bring back the formerly forbidden Cuban cigars and rum.

It's not a cheap destination, she added. Hotels are expensive. Restaurants, however—the family-run paladares—are inexpensive and provide farm to table bounty.

'You don't want to saturate the infrastructure,' she said, adding that once more infrastructure is in place and more tourists can be housed, it's inevitable things will change.

She thinks cruise ships could make good floating hotels although passengers wouldn't get the full experience because they'd be dining on board.

Conroy, who previously held senior sales roles with cruise lines including Silversea, Crystal Cruises and Cunard, views a cruise to Cuba as the second best way to go, after a land tour. She maintains the island merits more than a short stayover so people can experience 'the real Cuba.'

That means eating at the paladares and activities like visiting community art projects, hearing the music, studying the architecture, learning about the history and understanding how people live now.

Conroy said several cruise lines not currently licensed to operate in Cuba are interested in offering land tours as add-ons to sailings from South Florida. However, hotel allocations in Cuba during 2016 are 'pretty much locked up.' David Morris International has about 40 dates next year so any such programs would have to be coordinated with cruise schedules—which may be a challenge, she noted.