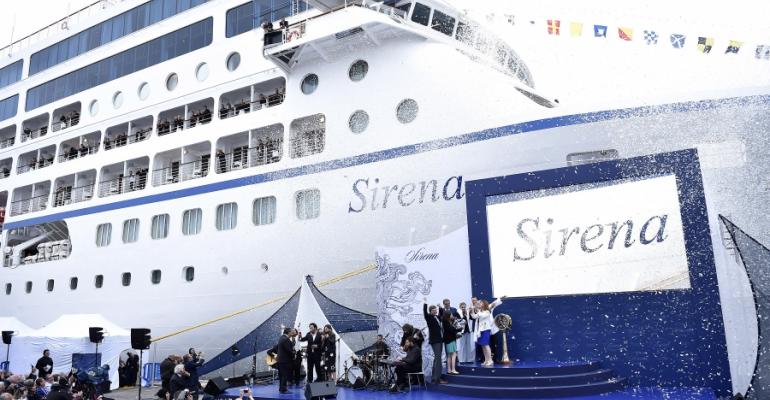 Oceania Cruises expanded its fleet with the inauguration of Sirena, another R-class ship, during festivities in Barcelona on Wednesday. Claudine Pépin, the daughter of master chef Jacques Pépin, served as the godmother, smashing a bottle of Moët & Chandon Champagne on the hull.

Joining Pépin were Frank Del Rio, president and ceo of  Norwegian Cruise Line Holdings and co-founder of Oceania Cruises; Jason Montague, president and chief operating officer, of Oceania, and Jacques Pépin, who has served as the line’s executive culinary director since its inception.

'With an unwavering commitment to serve our guests the finest cuisine at sea, we established a culinary reputation that to this day defines the Oceania Cruises brand,' Del Rio said. He added that Sirena builds on that reputation with new gourmet dining experiences, and in godmother Claudine Pépin, whom Del Rio called a 'noted chef and member of the culinary world’s royal family.'

In addition to the new dining options, Sirena’s most prestigious accommodations, the Owner's and Vista suites, have an elegant new design. Plus, the ship will be the first in the Oceania fleet to offer the enhanced entertainment program being offered for the line.