Cunard and Cobh remember sinking of Lusitania 100 years ago 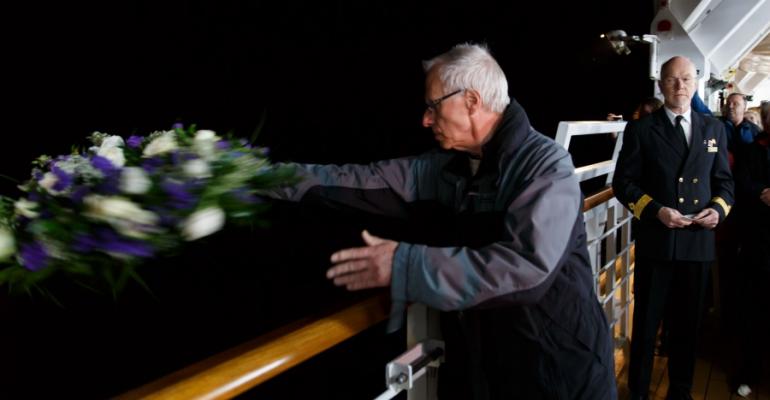 A passenger throws awreath from Queen Victoria over Lusitania wreck

Relatives of those who died and survived the sinking of Lusitania 100 years ago to the day were among those who gathered at the ship's rail aboard Cunard’s Queen Victoria in the early hours of Thursday as the ship paused over the site of the wreck, off the Old Head of Kinsale near Cobh in Ireland.

Four wreaths were cast into the sea at a moving ceremony on board before dawn to mark the 1,195 lives that were lost. The first was thrown into the waves by Commodore of the fleet and Master of Queen Victoria Christopher Rynd to represent the 401 officers and crew who perished, followed by chairman of Cunard David Dingle, for the shipping company.

Third to lay a wreath was 2nd engineer George Harrison, whose great grandfather was working in Lusitania’s engine room at the time the ship was torpedoed, representing those who worked on board, and the final wreath was cast by Alan Gibson, who lost his great uncle, one of Queen Victoria’s numerous passengers who had relatives who sailed on Lusitania’s fateful last voyage.

Other relatives clutched fresh flowers, ready to throw them into the sea in memory of family members lost or damaged by the sinking.  Queen Victoria then added her own tribute to those who perished by sounding a blast on the ship’s whistle or foghorn.

Commodore Rynd said  ‘Both those who died and those who survived the Lusitania disaster have been in the occasional thoughts of their families over time.  But today, 100 years on, we will remember them.’

Further commemorations for the 100th anniversary of the loss of Lusitania are planned ashore today.  A memorial service will be held in the  town that will be led by the President of Ireland, Michael D Higgins. British Ambassador Dominick Chilcott, US Ambassador Kevin O’Malley and German embassy Charge d’Affaires Wolfram von Heynitz will also attend as thousands of spectators are also expected.

Queen Victoria's Lusitania Remembered cruise sailed from Southampton on May 3 with calls at St Peter Port (Guernsey), Le Havre, Cobh and Dublin before returning to Southampton. Many passengers on board have family connections to victims and survivors from the disaster.