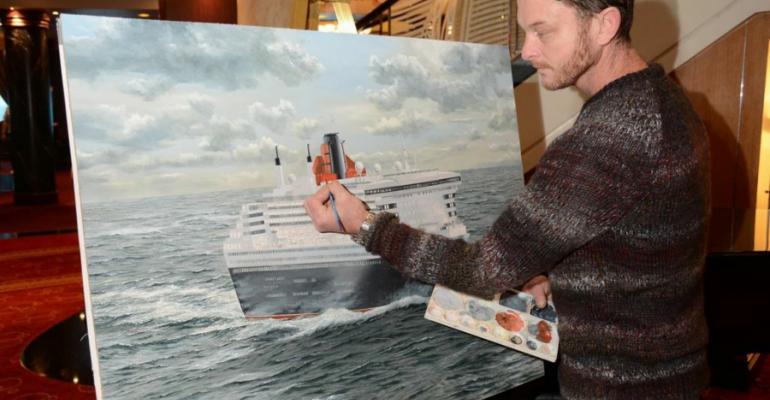 Robert Lloyd created the painting whilst onboard transatlantic crossing

Robert Lloyd, one of the UK’s most prestigious maritime artists has helped Cunard raise over £3,000 for The Prince’s Trust, after auctioning off a one-off oil painting produced during Queen Mary 2’s transatlantic crossing to New York.

The project titled, ‘Atlantic Splendour’ was executed in oils by Lloyd and depicts Queen Mary 2 cutting through the waves during her transatlantic route. The artist spent each morning of the seven night crossing in the Grand Lobby where passengers were able to watch the masterpiece come to life and ask questions about his work.

The painting was auctioned on the final day of the crossing in the Queens Room for $4,600, and the artist donated a further sketch which sold for $700 making a total of £3,400 for The Prince’s Trust.

Lloyd said, 'It has been such a pleasure working on this project in such a grand setting as Queen Mary 2 herself. Concentrating on the painting and talking to the guests looks easier than it is, but I’ve loved the challenge and I’m thrilled we’ve been able to raise so much money for The Prince’s Trust.'

Lloyd's association with Cunard Line started after a meeting with Liverpool-born retired Commodore Ron Warwick. Since then he has completed around a dozen paintings for Cunard, sailing on board QE2 and Queen Mary 2 on special celebration voyages, painting works featuring the ships.

In less than seven years, Cunard, now Platinum Ambassadors for The Prince’s Trust has raised over £1 million as it works to turn around the lives of disadvantaged young people in the UK.

Angus Struthers, marketing director for Cunard, said, 'Cunard have been proud supporters of The Prince’s Trust since 2007 and this is just another example of how committed we are to ensuring we raise a further £1 million for the young people, which it so devotedly supports by 2018.”