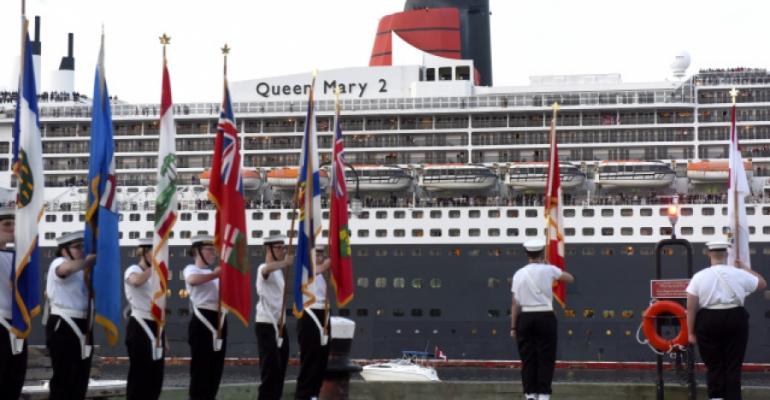 Cunard on Friday celebrated 175 years of history, tradition and industrial achievement in Halifax, home of its founder Sir Samuel Cunard.

The day-long event began at approximately 6 a.m. when Queen Mary 2 arrived in port, marking the trans-Atlantic crossing made by the company’s first flagship, Britannia, in 1840.

At 10 a.m., local dignitaries, port officials and key members of the Halifax community gathered to dedicate a new public space in honor of Samuel Cunard. The ceremony took place on the site of an upcoming mixed-use development led by Southwest Properties and in collaboration with Waterfront Development. Nova Scotia’s popular Rhapsody Quintet performed.

'Here next to the ocean, in Samuel Cunard's hometown of Halifax, we are pleased to celebrate 175 years with our partners, guests and the Cunard Line family,' said Colin MacLean, president and ceo, Waterfront Development. 'Looking to the future and the wonderful public space that will come to fruition as part of the broader development here, we are officially naming this space to be enjoyed by many for years to come as Samuel Cunard Quay.'

Later in the day, James D. Irving was awarded the first Samuel Cunard Prize for Vision, Courage and Creativity. Cunard joined forces with the Canadian Maritime Heritage Foundation and the Maritime Museum of the Atlantic to create the prize, which will be given each year to an extraordinary individual who has demonstrated the qualities exemplified by Samuel Cunard.

James D. Irving’s family enterprise has been growing business in Canada and the US for more than 130 years. Working with his brother Robert and his father, J.K. Irving, the family transformed their company into a world-class performer in various industries, including Irving Shipbuilding.

In honor of the 175th anniversary, the Maritime Museum of the Atlantic reopened the Cunard portion of their 'Age of Steam' exhibition and launched a new Samuel Cunard retrospective showcasing the founder’s impact on global business, transportation and world events.

Lynn Ledwidge, director, marketing, Destination Halifax, expressed pride in her city as the birthplace of Sir Samuel. Besides celebrating these roots, the anniversary events 'toast the future of the Halifax-Cunard connection,' she said.

Queen Mary 2 departed the berth at 8 p.m. and conducted a tour of the harbor. The Royal Canadian Navy saluted the liner from the Frigate HMCS Montreal as Royal Canadian Sea Cadets fired salute from shore. The cadets, ages 12 to 18, are part of a youth organization co-sponsored by the Canadian Armed Forces and the civilian Navy League of Canada. As Queen Mary 2 continued on a course to mid harbor and directly opposite HMC Dockyard (site of the original Cunard Wharves where RMS Britannia berthed), she turned to port and fell into line with escort vessels Theodore Tugboat, Tugboat Atlantic Oak (with water canons) and HMCS Montreal.

The procession passed close to the Halifax Boardwalk/Waterfront, providing opportunity for the public to witness the ceremonial conclusion to the Halifax celebration. A naval artillery saluted from the wharf of the Maritime Museum of the Atlantic.

Queen Mary 2 and escort vessels continued moving slowly southward along the Halifax seawall and leaving Georges Island to port. Upon passing Pier 21 the flotilla was joined by yachts and other pleasure craft from the Royal Nova Scotia Yacht Squadron and other yacht clubs.

Queen Mary 2's commemorative crossing continues as the ship sails to Boston and New York, with events scheduled for each port. Seatrade Cruise News will be on hand for the New York festivities.