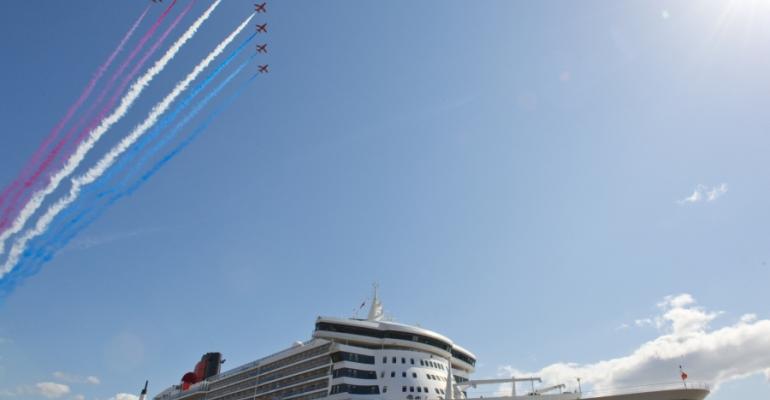 Since that 1840 crossing, Cunard’s ships have crossed and re-crossed the Atlantic, linking the UK and North America every year since, in peace and war.

Britannia was Cunard’s first flagship but at just 1,154gt and carrying 115 passengers, she could fit inside the Britannia Restaurant of today’s 150,000gt Queen Mary 2, which accommodates 2,600 guests.

Cunard celebrated the 175th anniversary with two concerts for Queen Mary 2 passengers and regional dignitaries at Liverpool’s Anglican cathedral. Cunard’s story was told in words and music with noted speakers from the worlds of politics, TV and beyond introducing musical interludes representing key periods in the line’s history, performed by the Royal Liverpool Philharmonic Orchestra, the Royal Liverpool Philharmonic Choir, the Liverpool Cathedral Choir, the Band of the Welsh Guards and soloists Laura Wright, Jon Christos and Jenny Williams.

Working in partnership with the city and its 175 trans-Atlantic themed activities at Pier Head, which included a Food and Vintage Festival, Classic Car cavalcade and world record catwalk bid, Cunard’s 175 year celebrations culminated in a dramatic firework display fired from a mid-river barge as Queen Mary 2 prepared to sail.

History was also made in Liverpool when 400 Cunard passengers embarked Queen Mary 2 bound for Halifax, Boston and New York. This was the first time in nearly 50 years that passengers have set out on a trans-Atlantic crossing from Liverpool since Cunard’s Franconia’s last crossing from the city in 1968.

‘Queen Mary 2’s departure today on a special crossing from Liverpool to Halifax and Boston re-creates that first voyage, and on-board talks by historians, ship designers and Cunard specialists will bring fresh new perspectives to the Cunard story, just as our two concerts in Liverpool's Anglican cathedral have really brought the company's history alive in such a resonant way,’ commented Cunard’s marketing director, Angus Struthers.