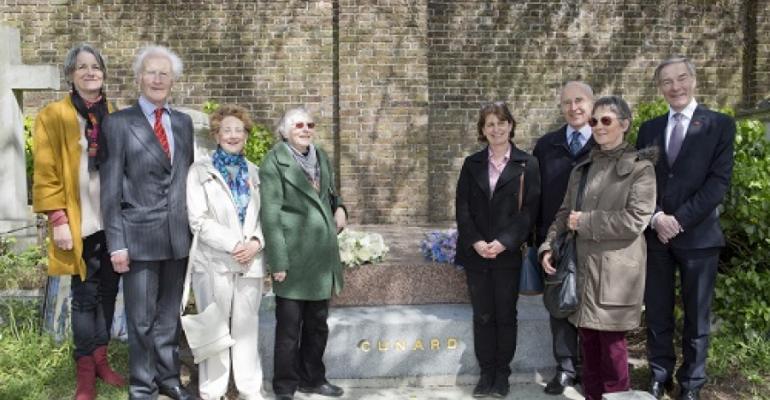 Tributes were paid by Cunard at the grave of its founder, Sir Samuel Cunard, on the 150th anniversary of his death on April 28, 1865.

Cunard has had Sir Samuel’s final resting place at Brompton Cemetery in London refurbished in this 175th anniversary year for the company.

Prior to each laying a wreath, both Dingle and Tom Charrington paid tribute to the man who changed the face of ocean travel forever.

Dingle called Cunard 'one of the great Victorian entrepreneurs.'

He said that 'Like Brunel, Stephenson, Wedgwood and Bazalgette, what he created has had an incalculable impact on the lives of millions. The success of Samuel Cunard in establishing the first regular steamship service across the Atlantic was not only of monumental significance at the time, but it has reverberated down the years. It has impacted on British history, on American history, on Canadian history, on European history, on maritime history and on military history.'

Dingle continued that Cunard's triumph was to create a fast, reliable and safe steamship service linking the Old World and the New. Although specifically to ensure the speedy delivery of the mails, the service was, as The Times reported in 1875, 'like a hand stretched out from England to invite America to assume its proper place in the comity of nations.'

Cunard's existence has affected much more in the world.

For his part, Tom Charrington stated Samuel was not just a great-great-grandfather but also a great man.

'When he was a boy of 10 he witnessed a disaster when a frigate [La Tribune] went aground in a storm on Thrum Cap Shoals and 240 people were drowned. Partly because of that, safety was always his priority with his ships, rather than speed.'

Cunard learned from an early age about how to make money, trading as a small boy down in the harbour at cargo auctions and taking his profits back in a sock he had knitted himself while driving cows up to his father’s pasture. His motto, Charrington said, was 'By perseverance' and he was 'devoid of bombast and bravado, of self promotion and conceit.'

A Canadian of American parentage does not seem the classic candidate to establish a British icon. And a man so prudent, conservative, cautious and austere doesn’t seem likely to take such huge economic risks or to push the edges of known technology that the founding of the company entailed.

By the time he came to set up the British and North American Royal Mail Steam Packet Company, as Cunard’s company was originally known, Samuel Cunard was already a prosperous businessman and significant figure in Nova Scotia. He was comfortably settled, with his children around him, seemingly destined for a quiet retirement.

Instead, Samuel gambled everything he had to set up, 3,000 miles from home, a highly speculative and enormously risky venture uncomfortably close to the forefront of known technology. To do it, he even uprooted himself from his native Nova Scotia and took up residence in London.

Cunard Line said it all seems markedly out of character with everything he’d done before, and with everything he did afterwards when the company settled down to be a singularly cautious and conservative company in the mould of the founder.