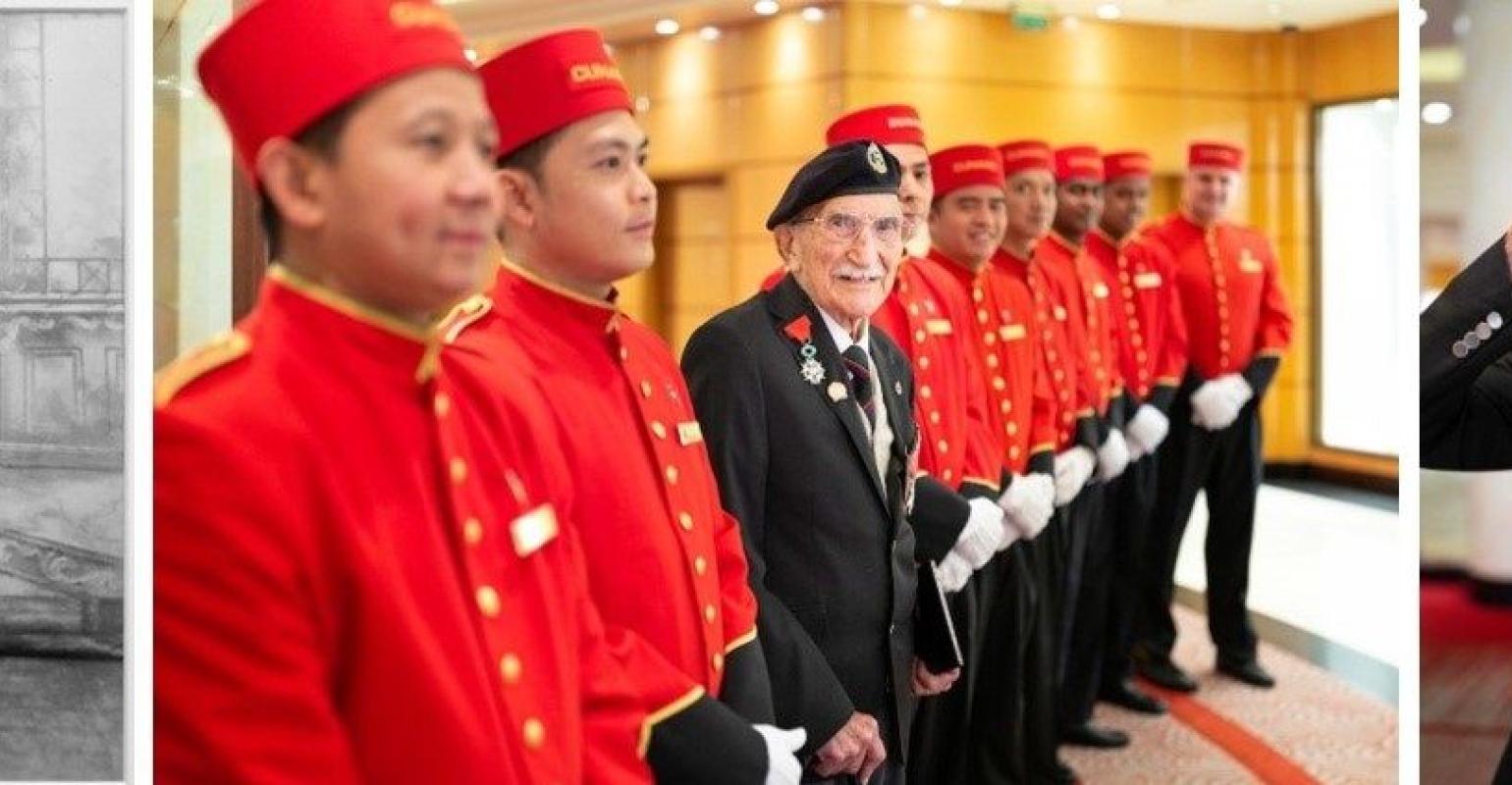 John Jenkins as a 14-year-old Cunard bellboy on board RMS Mauretania (1933), at far left, and during his recent visit to Queen Mary 2 in Southampton
Cunard welcomed back one of its oldest former crew members as the line prepares to celebrate his 100th birthday in the same month that Cunard will mark 100 years of sailing from Southampton.

The captain invited Jenkins to inspect the ship’s bellboys to ensure they met the high standards of 1930s Cunard service. Queen Mary 2’s crew easily passed the inspection, though Jenkins was quick to point out that working on board Mauretania was quite different to how it is today.

'I remember one of my first trips, when we sailed to the West Indies,' he recalled. 'When we would arrive in port I would then have to walk around on deck with a gong, as we had no tannoy system back then, and bang the gong and say, "All visitors ashore, all visitors ashore."'

Born at a time when ocean liners were the only way to travel, Jenkins went on to join Cunard in 1933 as a bellboy and lift operator. Mauretania was the first Cunard ship he was appointed to, and the ship that established Cunard’s Southampton hub in the year of his birth.

After Mauretania was retired in 1934, Jenkins served aboard Cunard's Ascania until the outbreak of World War II. Joining the war effort, he fought at D-Day in 1945, before returning to the UK to take up a career in the merchant navy.

'It was such an honor to welcome back Mr. Jenkins to the Cunard family,' Capt. Hashmi said. 'It felt like a very fitting way to start our centenary celebrations, here in Southampton, and of course to congratulate Mr. Jenkins on such a special milestone birthday that he will celebrate later this year. The members of the ship’s company and I thoroughly enjoyed listening to stories of what life was like on board, and we look forward to the opportunity to do so again.'

Departing Nov. 18, Queen Mary 2 will undertake a trans-Atlantic crossing from Southampton to New York in tribute to the century-long relationship between Southampton and Cunard.

Passengers on this voyage will journey into the past thanks to a travelling maritime exhibition from Southampton’s Sea City Museum, as well as a series of enrichment lectures on board. Maritime historian and author Chris Frame will be joined by local history expert Penny Legg, each presenting a series of talks about the history of Cunard and Southampton.