Cunard's Queens sound a welcome to the royal baby 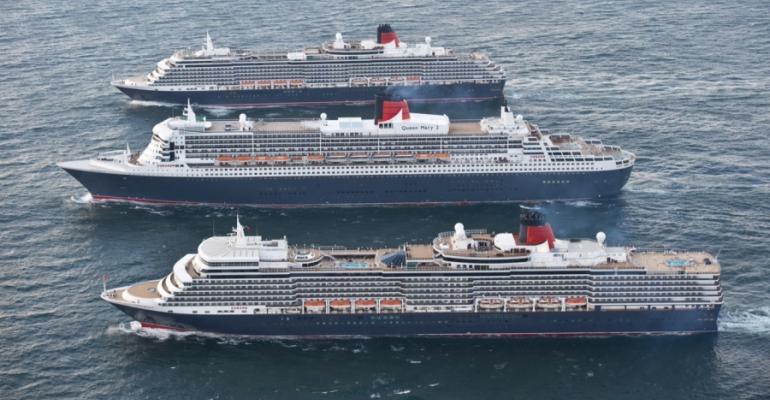 Just hours before, Kate, the duchess of Cambridge, and Prince William became the parents of a daughter.

Following the time-honoured magpie rhyme beginning ‘One for sorrow, two for joy,' the fleet sounded their whistles three times in unison, ‘Three for a girl (four for a boy).'

The three ships are to arrive at Southampton May 3, inaugurating the start of Cunard’s 175th anniversary year.

'How wonderful to have the opportunity, at the same time, to celebrate the arrival of the new royal baby girl, the fourth in line to the throne. On behalf of everyone at Cunard we would like to wish their Royal Highnesses all the happiness that a new arrival brings,' said Christopher Rynd, commodore of the fleet and master of Queen Victoria.

Sunday afternoon, the three Queens will sail for the first time, together in daylight from Southampton led by Queen Mary 2.

The ships will be setting off on their summer season of trans-Atlantic crossings, Mediterranean fly-cruises, Scandinavian and southern European sailings, with Queen Mary 2, Queen Victoria and Queen Elizabeth heading for New York, St Peter Port (Guernsey) and Hamburg respectively.