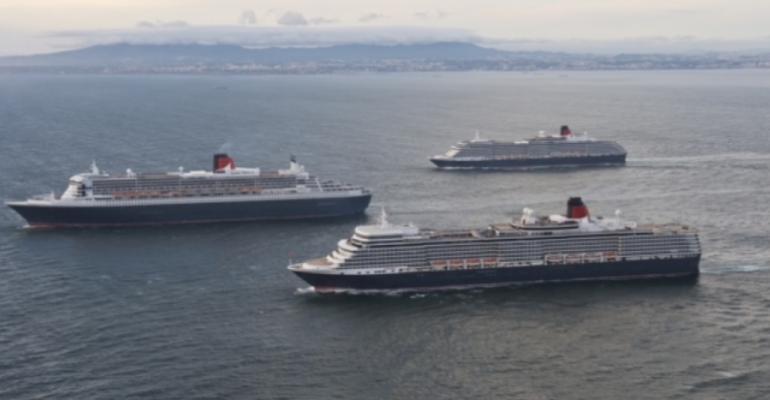 A picture that was months in the making
Cunard's Queen Mary 2 and sister ships Queen Elizabeth and Queen Victoria sailed in formation from Lisbon Tuesday to the UK ahead of HRH The Duke of Edinburgh's visit to celebrate Queen Mary 2's 10th anniversary in Southampton on May 9.

For the first time, the three Cunard Queens were photographed side-by-side at sea as part of a shoot that was months in planning.

'Most of the work in this type of photography is actually in the preparation beforehand. You don’t just happen to go up in a helicopter and take a great shot. Months of preparation go into planning these things for that one moment,' Morgan said.

Part of this planning was a logistical meeting with the captains and crew of the three ships to schedule the photo shoot down to the minutest detail.

It took the three ships around an hour to sail out of Lisbon to the site of the shoot. All shipping in the area had to be cleared for the three Queens to ensure absolute safety for the technical manoeuvre.