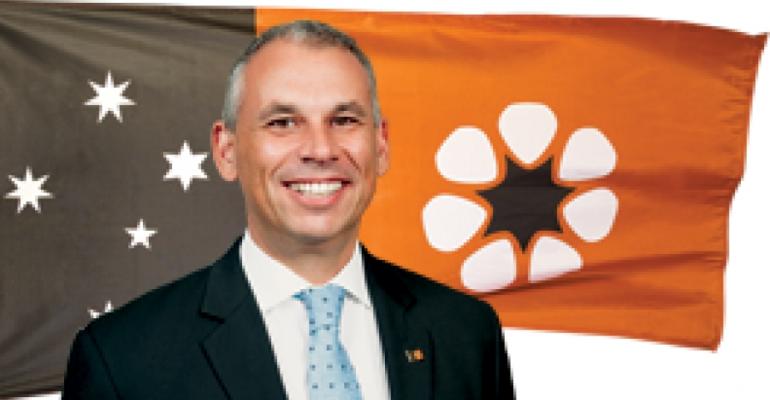 Man with a plan - Adam Giles, the Northern Territory's chief minister and minister for tourism

Between March 2-6, six cruise ships carrying more than 11,500 passengers and 5,000 crew will visit Darwin making it the busiest cruise week on record.

Tourism Northern Territory has declared ‘Cruise Week’ with an army of volunteers to assist passengers to get around.

Highlights of 'Cruise Week' will be musical entertainment at the Smith Street Mall, pop-up craft and souvenir shops at the Darwin Waterfront Precinct, beer tastings and barramundi cooking demonstrations. Shops will have ‘Cruise in for a Great Deal’ stickers in their windows and there will be free Wi-Fi in the central business district.

The Chief Minister of the Northern Territory and Minister for Tourism, Adam Giles, has released a Cruise Sector Activation Plan 2015-2020 to keep the momentum going.

‘That is more than triple the figure 10 years ago with just 11 cruise ship visits worth A$4.14m to the economy.

‘We want to see this expansion continue and maximise the benefits to local tourism and business operators.’

He said the Activation Plan focusses on three key areas: Bringing more cruise lines to Darwin and encouraging them to homeport ships in Darwin, ensuring Darwin is more than capable of handling visits from the largest cruise ships in the world and enhancing the passenger and crew experience of Darwin.

Cruise Down Under anticipates the cruise sector in Australia will continue its past 10 years of double-digit growth, with new markets like Asia opening up to cruise experiences.

The annual Cruise Down Under conference will be held in Darwin September 2-4.