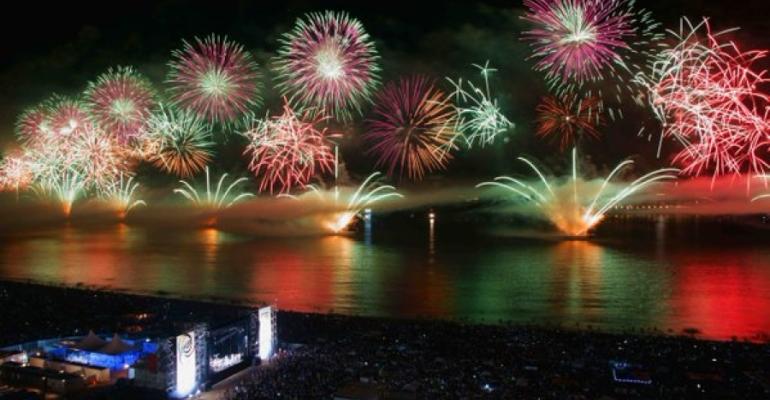 They got a privileged view of the 16-minute fireworks display from their ships' exterior decks and thousands of balcony cabins.

According to Brazilian tourism officials, more than 24 tons of fireworks were launched from 11 barges anchored off shore.

Cruisers on the MSC ships were also treated to a special New Year’s Eve dinner and a night of partying before a New Year’s Day breakfast was served.

MSC Cruises is currently the leading operator in the South American market with a wide range of seasonal itineraries from Santos and Rio de Janeiro to destinations in Brazil, Argentina and Uruguay.

On its inaugural South America cruise, MSC Splendida arrived from Santos to Salvador de Bahia. Before reaching Copacabana Thursday, the ship also called at Buzios. The last port of call on the seven-night cruise is Ilha Grande before MSC Splendida returns to Santos.

Newly enlarged and improved in the line's 'Renaissance Program,' MSC Lirica had sailed from Rio de Janeiro to Salvador, then on to Cabo Frio, before returning to Codpacabana for the year-end celebrations. The ship’s final call is Ubatuba.

MSC Lirica sister ship MSC Armonia left Santos on Tuesday, heading for Porto Belo. After New Year’s Eve in Rio, the ship sailed on to Ilhabela. Buzios and Ilha Grande will be the last calls on the six-night cruise. MSC Armonia was the first of four ships to get upgraded in $217m Renaissance expansion.

MSC Poesia had arrived from Buenos Aires, carrying mainly Argentinians, and besides the Copacabana fireworks display, the cruise includes Brazil's Ilha Grande and Ilhabela and Punta del Este in Uruguay.