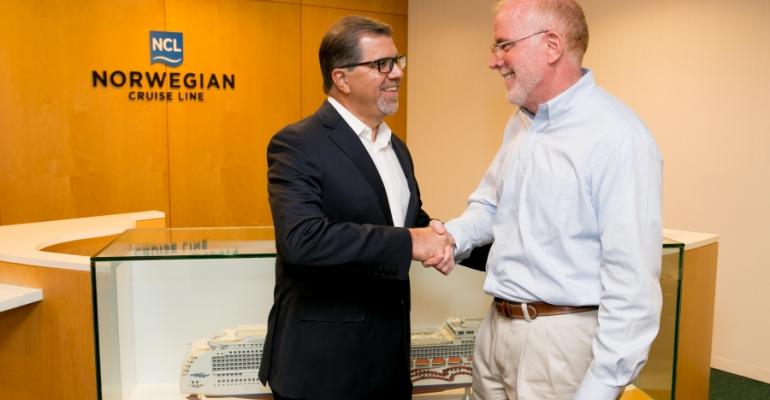 Norwegian Cruise Line Holdings has completed the $3bn acquisition of Prestige Cruises International, the parent of Oceania Cruises and Regent Seven Seas Cruises. The closing had been anticipated at about this time for a deal that Norwegian ceo Kevin Sheehan has called 'the most exciting point since my joining Norwegian.'

The $3.025bn includes $1.8bn in equity in a transaction comprising cash, stock and the assumption of debt. Norwegian reiterated it expects synergies of $25m—the company has listed joint purchasing, port agreements and insurance among the areas ripe for savings—with additional opportunities post-integration.

Following the closing, Apollo Management and Genting Hong Kong hold equal 25% stakes in the expanded company and TPG Viking owns 7%. Apollo previously held a 20% stake in Norwegian, while Genting HK had 28% and TPG Viking 7.9%. Apollo had owned 59% of Prestige Cruises.

'While for years we have competed successfully with our one brand in an increasingly consolidated industry, our acquisition of Prestige creates a new cruise operator with a range of complementary offerings as diversified as any in the industry,' Sheehan said.

The three brands operate a combined 21 ships with approximately 40,000 lower berths and serve more than 430 destinations worldwide. Five new ships are due through 2019, and perhaps there may be opportunities to acquire tonnage, as well.

Norwegian currently fields 13 ships with a total of 34,500 berths, while Prestige has eight ships and nearly 6,500 berths. Norwegian has contracted four large newbuilds for delivery from 2015 through 2019, while Prestige's Regent has one ship coming in 2016.

The focus now shifts, Sheehan said, from planning for the successful integration of the organizations to the implementation phase 'with an organizational structure that allows for the realization of significant synergies while maintaining the integrity of the Norwegian Cruise Line, Oceania Cruises and Regent Seven Seas Cruises brands that have made each a success in their respective segment.'

For his part, Prestige ceo Frank Del Rio expressed excitement to officially join the Norwegian family and readiness to begin a next chapter as one united company.

'Together, we will further our brands’ position as leaders in the upper-premium and luxury cruise markets by continuing to deliver an exceptional on-board experience for our guests, and expand the reach of both Oceania Cruises and Regent Seven Seas Cruises throughout the world,' Del Rio said.

As earlier reported, in the combined organization, cfo Wendy Beck, the newbuild area and a few others will report to Sheehan.

Many of the day-to-day responsibilities for the Norwegian brand will be assumed by recently appointed president and chief operating officer Drew Madsen, Del Rio will act as chief executive of Oceania and Regent, and Kunal Kamlani will continue as president of the two brands.

The official path to the deal began in early July when Norwegian's board formed a transaction committee of disinterested directors that was delegated with the authority to negotiate and approve a transaction. Plans for the acquisition were announced Sept. 2.