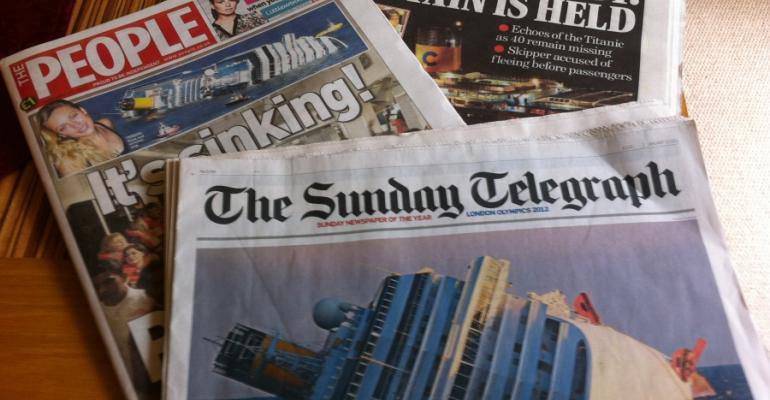 Costa Concordia dominates the headlines
As a member of Costa Concordia’s crew was located unharmed inside the vessel early Sunday—this after Saturday’s rescue of two South Korean passengers—attention in Italy is focussing on how a modern cruise ship operating in calm waters could strike rocks described by the Italian media as clearly visible from the shore and suffer such a deadly grounding.

Sailing past the island of Giglio on Friday evening, the 2006-built vessel struck rocks that tore an almost 70mtr gash in its hull before taking on water and coming to rest on its side close to land. As of Sunday morning, two French passengers and a Peruvian crewman were confirmed dead and 60 people injured, some seriously. A further 38 passengers and crew remain missing.

Italian media reports suggested that the ship had taken an unusual route close to Giglio—passing just 500mtrs from shore —perhaps by way of greeting to the island community. They add that Costa Concordia would normally have sailed a route two to three miles from shore.

According to news service Ansa, Capt. Francesco Schettino, who is now under arrest on charges of culpable homicide, shipwreck and abandonment of his ship, argues that the rocks were not identified on the ship’s chart, a claim reportedly denied by local Coast Guard officials.

Though there are conflicting reports about the efficiency of the crew’s response after the vessel struck the rocks, with Costa Crociere stating that procedures were followed to the letter and some passengers disputing this, numerous reports suggest that if the crew had not brought the vessel closer to shore and into shallower waters, it would have sunk swiftly and catastrophically.

The impact on the company, and on the wider cruise business, has yet to become clear. However, there is widespread concern within the industry over the impact the disaster and the dramatic images from Giglio will have on cruising’s image, and so on demand, at a particularly delicate time for the global economy and just as the important wave booking season kicks off.

The European Cruise Council was swift to identify the danger, issuing a release that assayed the difficult task of expressing deep concern for the victims of Friday night’s grounding and promising full cooperation in the investigation, while reassuring the public about the safety of cruising.

The ECC noted that its member companies ‘operate to the highest safety standards around the world and according to international maritime requirements. During the past two decades,’ it added, ‘cruise lines have maintained the best safety in the travel industry while transporting more than 90 million people throughout the world.’

Pointedly, since the crew’s response to the Friday’s collision will be a major element of the Costa Concordia investigation, it also noted that ‘ships’ crews undertake regular training and drills for emergency situations, including the evacuation of a vessel. This training includes scenario training to cover different incidents.’

For its part, Cruise Lines International Association paid ‘tribute to all those who worked tirelessly to evacuate the ship to help minimize casualties.’

The association added: ‘CLIA would also like to reassure other cruise ship passengers that all CLIA member lines are subject to the highest safety standards around the world and according to international maritime requirements.’