Into the deep with luxurious Seabourn subs by U-Boat Worx 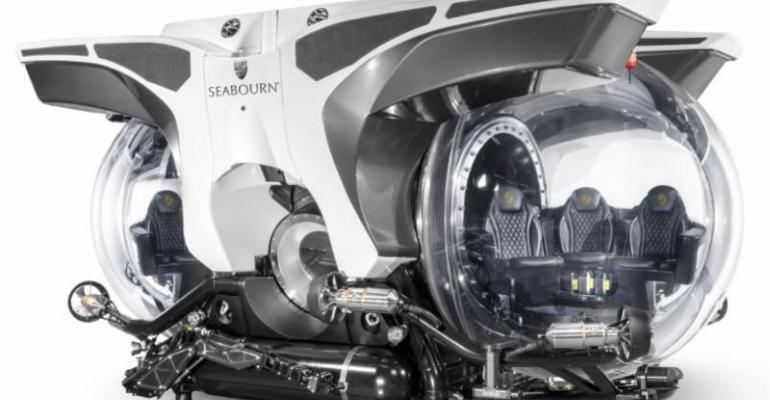 Travelers will sit in two clear acrylic spheres flanking the center pilot’s station, and get undisturbed and undistorted views in virtually all directions
Seabourn is showing off its custom submarines that will operate extra-charge excursions from the line’s two upcoming expedition ships. Both Seabourn Venture and a sister ship will carry two custom-designed U-Boat Worx Cruise Sub 7 subs.

Each battery-powered sub will carry six travelers and one pilot, who will guide the journey up to 300 meters beneath the surface to explore wrecks, reefs and marine wildlife. Travelers will sit in two clear acrylic spheres flanking the center pilot’s station, and get undisturbed and undistorted views in virtually all directions. The three passenger seats in each sphere are mounted on a rotating platform.

'With these subs, we’re going to take our guests to places that few have ever seen firsthand, leaving them with a perspective on the world around us that is jaw-dropping and will create stories to last a lifetime,' said Robin West, VP expedition operations for Seabourn.

Video recordings of outside and inside the sub

The subs will be outfitted with a 4k underwater video camera system to record the world outside while an internal video recording system will capture imagery of the travelers inside and their direct surroundings. Video footage can then be downloaded and projected on large screens in the Discovery Center during lectures aboard the ships.

A six-function manipulator arm capable of lifting up to 32 kg/70 pounds will also be mounted on the side of the sub.

A champagne chiller, of course

In Seabourn style, each sub on both ships will be outfitted with custom embroidered leather upholstery, two air conditioning systems, a Bluetooth stereo system and champagne chiller.

The subs will be operated multiple times per day in regions around the world where conditions are suitable. They will be equipped with underwater LED flood/spot lights, imaging sonar that acts as a second set of eyes and an advanced underwater tracking and navigation system.

According to U-Boat Worx, the subs are certified for continuous dive operations of up to eight hours and are equipped with a multitude of safety features. Certification by classification society DNV GL ensures international compliance.

Following the implementation of U-Boat Worx subs aboard The Taipan of Star Cruises and Crystal Esprit, the Netherlands-based submersible manufacturer is seeing increased demand from the cruise industry.

'Our operations on cruise ships have inspired the development of our Cruise Sub series,' said Bert Houtman, founder and chairman of U-Boat Worx. 'Whether the operator is involved in deep-sea exploration at remote locations, or is undertaking repeat sub-sea excursions around coral reefs, our Cruise Subs provide an optimal and unforgettable underwater dive experience for passengers.'