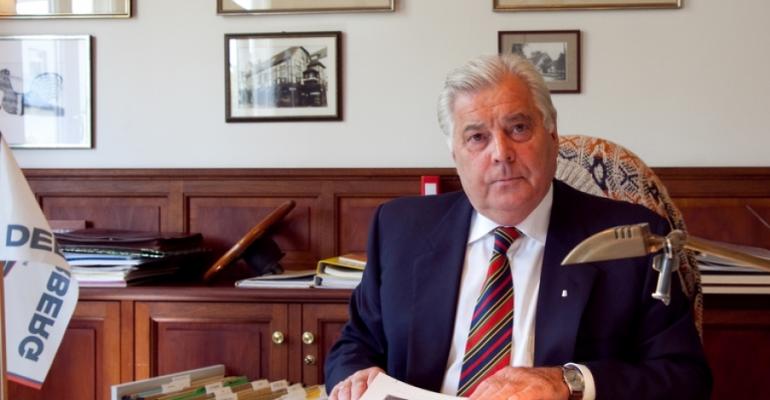 ‘Less or no incineration, and as much recycling as possible’ – these will, according to Jochen Deerberg, be the cornerstones of the cruise industry's future approach to waste management.

Speaking to representatives of owners, yards, ports, port operation companies and other experts, the owner and ceo of Deerberg-Systems presented his analysis of the waste topic at a hosted Round Table on Monday in Hamburg's Atlantic Hotel, where he also introduced a new Waste Management System called MPWMS Flex.

‘Shipping, and especially the cruise industry, is changing its waste management philosophy’, Deerberg claimed, calling the trend towards more recycling ‘clear and obvious’.

This demands a sophisticated Waste Management System able to adapt to different operational environments: ‘A cruise ship will be operating for 30 to 40 years and must be totally flexible in handling the Waste Management Process onboard,’ Deerberg said.

He highlighted ships will have to operate under three basic scenarios or a combination of them: Scenario A is the present industry standard noted Deerberg, where as much waste as possible is incinerated and storage space is mainly used for ash, glass, tins and special waste; Scenario B is, in contrast, based on a combination of incineration and recycling with a clear focus on contaminated waste and in Scenario C, the shipboard waste is completed landed onshore after processing and preparation onboard, with no incineration taking place at all.

According to Deerberg, a 5,000 passenger cruise ship will land 28 tons of garbage after a seven-day cruise under Scenario A. If 100% recycling is implemented under Scenario C, the amount of landed garbage increases to 102 tons.

‘However, this can only be achieved if ports with respective reception facilities are available,’ he remarked.

To meet these requirements, Deerberg-Systems is introducing a new version of its Multi Purpose Waste Management System Flex' (MPWMS FLEX). ‘The upgrade enables a ship operate and combine the three basic scenarios,’ he claimed, adding the system combines ecologic and economic advantages. Based on a 3,000 pax ship, it can reducing CO2 emissions by 2,700 tons and cutt operation costs by €100,000 euros annually, Deerberg claims.

The system is available for new ships and as a retrofit for waste management systems onboard existing vessels.