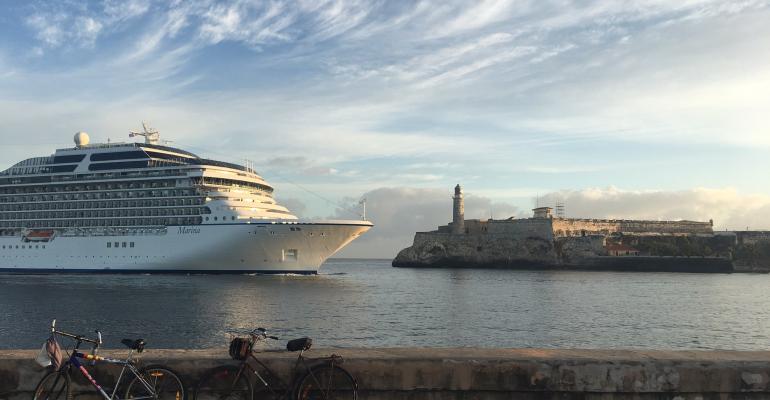 Cancellations were high on the Cuba-intensive routes offered by the Oceania and Regent brands. Pictured here is Marina entering Havana harbor
Though Norwegian Cruise Line Holdings is dealing with a hefty impact from lost Cuba sailings in 2019, Frank Del Rio stressed the Caribbean is still performing well without that high-premium destination and said the replacement itineraries will go a long way to mitigate the lost revenue in 2020.

This was after NCLH projected a 45-cent per share loss from Cuba this year, at the high range of its initial assessment in early June — just a couple days after the Trump administration abruptly halted sailings — and higher than the losses projected by competitors.

For 2020, the estimated flow-through of the Cuba change is approximately 20 cents to 25 cents per share, mainly from the loss of the premium pricing for those itineraries.

NCLH chief Del Rio also delivered a bullish assessment of the economy and scolded capacity worrywarts for their 'overblown and nagging concern' about all the berths coming on line in future years.

Though the company cut its earnings forecast for 2019, largely on Cuba, investors pushed the stock up 2% to close at $48.60 on Thursday.

But that doesn't put a dent in the fact that NCLH's earnings multiple has shrunk to record or near-record lows even as the company outperforms. CFO Mark Kempa cited a 'significant disconnect between our share price and our long-term value and future growth profiles.'

Though Cuba comprised only a 4% share of NCLH deployment, the impact was 'outsized,' Del Rio said, because of Oceania Cruises' and Regent Seven Seas Cruises' longer sailings calling at up to three Cuban ports. Roughly one-third of the company's Cuba cruises were on the two high-end brands.

All NCLH Cuba cruises got at least a 25% premium over similar itineraries without Cuba. However, the Cuba-intensive routes booked much sooner, nine to 12 months ahead, and 'sold out at very high prices well into Q1 2020,' according to Del Rio.

The company provided generous inducements not to cancel, including 50% refunds. But cancellations were high — greater than 80% of bookings for the cruises with strong Cuba content.

For Norwegian Cruise Line's two ships sailing to Havana, Freeport or Nassau was substituted in 2019, and both continue to visit Great Stirrup Cay, NCL's highest rated destination. In summer 2020, Norwegian Sun will shift to Alaska for longer, destination-intensive cruises, leaving the summer Bahamas program to the newly refurbished Norwegian Sky.

'We believe that Norwegian Sun's Alaska deployment will generate yields that will approach, if not be equal to, what she was commanding in her Cuba deployment, led by strong on-board spending,' Del Rio told analysts during Thursday's earnings call.

'If any itinerary has the potential to match Cuba yields, it's Alaska,' he added.

Oceania Cruises, which was operating most of the Cuba-intensive sailings, switched to eastern Caribbean voyages into early 2020. For the second half next year, the brand is extending its Mediterranean season far eastward, with Sirena calling at Turkey and the Holy Land, then continuing to India and Southeast Asia.

Caribbean load and pricing up

Del Rio brushed off concerns about weakened demand and overcapacity in the Caribbean as a result of the Cuba change.

'Demand for our 2019 Caribbean sailings remains strong, with load and pricing ahead across our three brands and extending well into 2020,' he said.

Turning to the 'overblown and nagging concern by some industry observers with regard to industry capacity coming on line in the next few years, Del Rio said 'relevant' capacity additions — those that compete directly with NCLH brands — are just 58% of the total incremental capacity in 2020 and 56% in 2021.

That's because expedition vessels, ships deployed to China and country-specific brands make up a 'considerable amount' of new capacity, and NCLH doesn't compete in those sectors.

The global consumer demand environment has remained healthy 'and may be healthier,' even as the US enters a second decade of economic expansion.

Europe, where NCLH pricing grew double-digits over the last two years, is continuing its run of pricing growth in 2019. That's on a 14% capacity spike due to Norwegian Pearl being redeployed from Alaska. European consumer-sourced revenue, meanwhile, shot up more than 50% year over year after the NCL brand switched from its 'Premium All-Inclusive' offer to 'Free at Sea.'

Alaska continues as one of NCL's markets despite this year's 30% capacity increase on Norwegian Joy's redeployment from China. The ship's on-board revenue has more than doubled in Alaska.

Even better next year?

In 2020, 'the picture only gets better as demand, load factor and pricing continue to outpace 2019 record levels.' Del Rio said.

Entering service in November, Norwegian Encore is the best booked Caribbean-introduced ship in Norwegian's history, by a 'very wide margin,' while 2020's new Seven Seas Splendor is driving record pricing for Regent despite a 26% increase in capacity. Oceania and Regent reached a 50% load factor for the coming year's sailings faster than ever before, at higher prices.