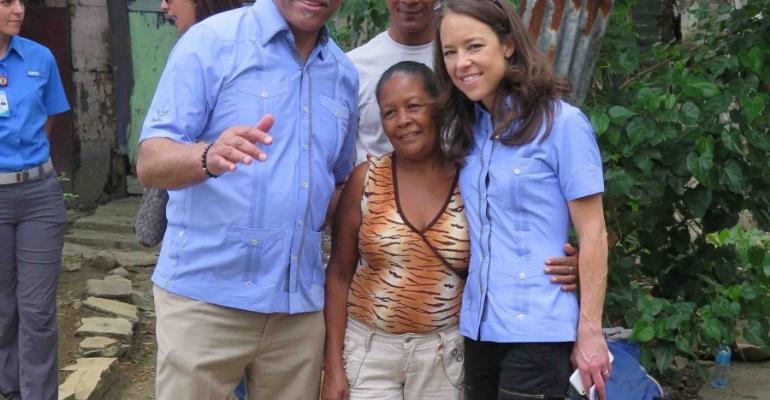 Carnival Corp.'s Arnold Donald, left, and Fathom's Tara Russell, right, with Puerto Plata homeowner Amparo, who got concrete floors in her home thanks to Fathom volunteers, and her grandson, Lorenzo (Photo: Anne Kalosh)
Replacing dirt floors with concrete in families' homes, planting mangroves, recycling paper and teaching English to schoolchildren or families in their communities are not typical cruise activities. Yet travelers rolled up their sleeves and relished these and other 'social impact' projects during Fathom's inaugural Dominican Republic sailing.

'I loved the children. I felt they taught us as much as we taught them,' said Alice Brown, a retired teacher from Wisconsin whose sister won the cruise in a contest. Brown, who said she was 'thrilled' with Fathom, wants her adult children to book because 'It's a wonderful experience.'

She described Fathom as 'holistic ... They prepare you for what you're going to experience and enable you to share what you've experienced.'

'It is a very special product,' according to Mark Flager, sales manager for WMPH Vacations/iCruise.com, aboard the inaugural voyage. His company has taken bookings for Cuba, a program that 'sells itself.' For the Dominican Republic itinerary, though, travel agents need to understand it and match it with the proper client, Flager said, citing Fathom's target markets as purpose-driven millennials, adults 50-plus/multigenerational groups and mindful families.

'I'm sure there are many families and individuals empathetic to volunteering, and this will be an opportunity for them,' Flager added.

He noted the advance materials Fathom provided agents hadn't detailed the extensive shipboard programming, packed with workshops and group encounters. 'They took a lot of time and effort to put this together,' he said.

'Lifehack Bootcamp,' for one, helps participants 'create more time through proven productivity methods.' Flager said the workshop delved into what people would do if they had an extra two weeks a year. Meanwhile, 'Travelers of Fathom,' designed by Ashoka and modeled on Humans of New York, examines how empathy and creativity can help find solutions to challenges and fosters passengers' deeper engagement with Dominicans.

A Texan who regularly goes on church missions and had just earned her nursing doctorate said she chose Fathom to reward herself with a trip that involved volunteering but also some pampering and relaxation. A retired Wisconsin government water supply engineer's interest was piqued by Fathom's ceramic water filter project. And a Utah travel agent accompanied by her daughter, a photographer, said she envisioned bringing groups of education majors for practice teaching ashore.

Some passengers expressed the desire for more pre-cruise information to prepare for impact activities while others said they'd like to focus on one activity all week.

'Some people were very taken with teaching English and wanted to do that exclusively,' Flager said, adding how 'impactful' it was to teach in private homes. 'There were piles of kids and they were radiant,' he said of his own experience. 'They were so interested and eager to learn. This was not just some feel-good exercise.'

In response to groups or individuals wishing to focus on a single activity, Fathom president Tara Russell said in future, specific content/programming may be presented in seasons or tracks. She was aboard the inaugural cruise and plans to host at least part of four more sailings.

The 705-passenger Adonia will be alternating weekly departures from PortMiami to the Dominican Republic for impact activities and to Cuba for cultural immersion.

At a women's paper recycling initiative, they tore mounds of waste paper into shreds that were washed, whirred into pulp in blenders, spread onto screens, then pressed to squeeze out the moisture. This produced sheets of paper that were dried on racks before being decorated and sold as cards or other products. As volunteers worked side by side with the women, they sang, joked and conversed.

At every Fathom activity, bilingual Dominican 'impact guides' from Fathom's local partner organizations, the long-established NGOs Entrena and Instituto Dominicano de Desarollo Integral, were along to explain, interpret and help facilitate the projects.

Scores of Adonia passengers ventured into rural communities and taught English in schools or homes. Because the Dominican Republic's main economic driver is tourism, knowing English can be critical for jobs. Invited into country classrooms or simple homes with great warmth, the volunteers helped people learn their ABCs and simple phrases using songs, flashcards and other provided tools. The curriculum will advance with each wave of Fathom teachers, and the students' progress is being tracked.

Reforestation work involved planting mangroves or sea grapes on the beach or nesting seeds for samán trees one by one into small bags of organic soil in a greenhouse; they'll later be transplanted onto a mountainside. These projects help stem erosion and provide habitats for wildlife.

Some passengers plunged into building ceramic water filters for homes that lack clean drinking water, while others participated in a rural women's collective that uses locally grown cacao to make artisanal chocolate to sell.

Among the hardest but most deeply satisfying projects because of its immediate impact, according to participants, was pouring concrete floors. One group of Fathom volunteers pitched in to transform a grandmother's tiny three-room, dirt-floored house. They lugged bags of cement and mixed the concrete then formed a bucket brigade to pass the cement to local professional builders who spread it.

A Fathom cruise isn't all work. Passengers can explore Puerto Plata's beautiful beaches, sail and snorkel, hike to waterfalls in the mountains and shop for arts and crafts. Excursions include snorkeling from a catamaran, zip lining and visiting Puerto Plata's centuries-old fort, mountaintop tram and a rum factory.

Aboard ship, passengers are assigned to 'cohorts,' or small groups led by a trained facilitator. These meetings mingle the educational (Dominican history and culture), practical (don't forget to use bug spray), inspirational (try something challenging) and reflective (what was the most meaningful experience?). Additional preparatory classes like 'Empowering English Tutoring' preview lesson plans and give teaching tips.

The Steiner Leisure-run spa offers the requisite fitness and salon treatments, Elemis facials, massages and acupuncture. Specially developed for Fathom were morning and evening yoga and group meditation sessions, offered at no charge. For the mantra-based meditation, each day has a different theme, such as flow, love, happiness or joy, corresponding with a chakra.

'The overall goal is to complement the theme of the boat, to create an additional, mindful experience for the guests on board,' explained Gordon McGregor, wellness developer, who said that group meditation can help achieve a sense of tranquility the motion of the ship at sea makes the experience 'magical.'

Adonia's shops sell fair trade goods such as Bajala jewelry made by artisans in India, Asia, Turkey and the Middle East, and knitware by Krochet Kids, each item signed by its Peruvian creator. The fine Marahlago jewelry features larimar, a blue stone mined in the Dominican Republic. Handcrafted items from Cuba will be added, too.

'We've gone for more quality and with that ethical background, there's always a story to tell with our products,' shop staffer Sophie Thatcher said.

Though Adonia had just emerged from a short drydock where it gained Fathom livery and fresh carpets, there were plumbing issues in some accommodations and the Wi-Fi was poor. Passengers new to cruising found the ship elegant, while others noticed the British flavor from its prior P&O Cruises deployment. Each room has a tea/coffee maker, while peanut butter health bars were added for a Fathom touch.

Carnival Corp. & plc president and ceo Arnold Donald called Fathom 'voluntourism with scale and holistic impact,' with 'thousands of volunteer opportunities a week.' Beyond Fathom, there are ways for passengers from other Carnival family ships to learn by visiting Amber Cove's Fathom Impact Center, participating in the port's own reforestation project and shopping its market for local items such as Chocal chocolates, from the women's chocolate-making collective.

While Donald said Fathom won't make a difference to Carnival Corp.'s bottom line, it has positives and 'we got into Cuba and probably wouldn't have without Fathom.' The reason Fathom is a for-profit enterprise, he added, is to make it sustainable.

Efforts in the Dominican Republic are being measured and, Donald hopes, over time will 'raise the floor' in education levels, availability of potable water and other gains.

'We're just getting started,' Russell told inaugural cruisers. 'First and foremost, it's important we have a genuine impact on people's lives in the Dominican Republic.'