Deployment in Australasia and the South Pacific rebounding 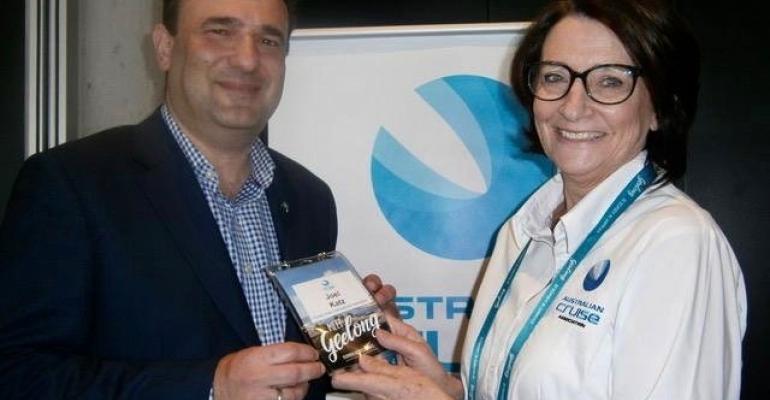 Joel Katz is given his ACA 2019 lanyard by Anne McVilly of Port Arthur Historic Site and chairman of the conference organising committee PHOTO: Helen Hutcheon

Joel Katz, CLIA Australasia & Asia MD, told delegates at ACA 2019 in Geelong that deployed capacity in Australia, New Zealand and the South Pacific is rebounding next year, up 12% following a relatively flat period.

‘Last year there were 62 cruise ships that visited at least one Australian port/destination. This included seven smaller adventure/expedition vessels with 100 or fewer passengers.

‘At the other end of the spectrum, the Ovation of the Seas with a capacity of 4,905 passengers was the largest cruise ship to visit Australia during the year.

‘In total, 49 Australian cities, towns and anchorages recorded 1,436 cruise ship visits. Not unexpectedly, Sydney, Brisbane, Melbourne, Cairns, Hobart, Darwin and Fremantle were the most frequently visited destinations during the past year.

‘Although the capacity constraints in recent years have resulted in the total number of ships remaining relatively constant, we have for a number of years seen visit days grow, which has been fuelled by an increase in the number of homeported ships.

‘What this means is that we have seen ships spending longer in Australian waters and visiting Australian ports, and therefore delivering a greater positive economic impact.’

However, he said, travel and tourism is growing far faster than the world’s economy is growing.

‘That hunger to see the world appears inexhaustible,’ he said. ‘This is great for us who are in the travel and tourism business, but also a source of concern around the world for how that business will be handled.’

Katz gave the example of the air lubrication systems that blow trillions of tiny bubbles out the bottom of the hull to create a microscopic buffer between the hull of the ship and the water to reduce friction and improve propulsion efficiency.

‘On land, shore power facilities are being introduced in ports around the world,’ he said. ‘For communities that have a clean source of energy and an electricity grid that can handle it, this allows ships to utilise mains energy instead of their engines while they are in port.

‘The list of these initiatives goes on and on.

‘Converting waste heat to energy and improving waste management systems to the point where nothing is sent to landfill.’

He also said there have been significant levels of recycling — 60% more per passenger than the average person recycles on land.

Then, Katz said, there is the use of LED lighting and the much publicised elimination of single-use plastics.