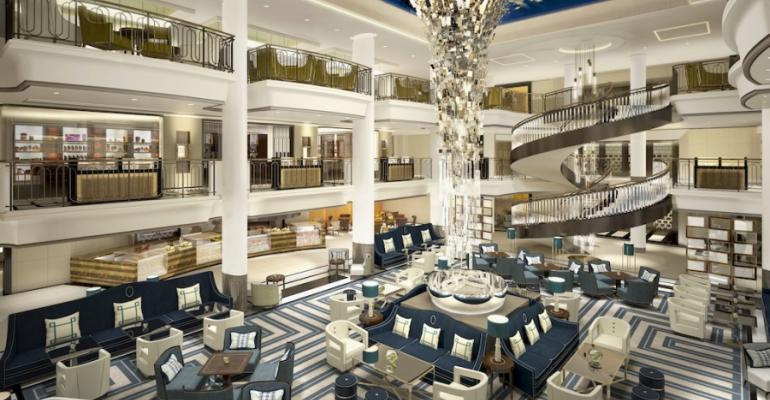 Hospitality interior design agency Richmond, responsible for creating cabins, suites and public areas on Britannia, has revealed some of the signature features on P&O Cruises’ newbuild, debuting in March.

The interior design scheme originates from P&O Cruises heritage, ‘with a quintessentially British sense of style and glamorous, classical touches,’ says the London-based designer; but goes on to say, ‘yet, it incorporates new innovations and concepts in dining, technology and entertainment to appeal to new audiences, as well as resonating with P&O Cruises loyal customer base.’

Richmond applied its experience in hotel design for the vessel’s three-deck Atrium with an elegant sweeping staircase connecting the decks.

It is much larger than in any previous P&O Cruises ships and Richmond has maximised its use by offering a Market Café, with patisserie from master patissier Eric Lanlard, delicatessen and gelateria, and the Blue Bar, which comes to life predominantly at night, as well as a number of shops located in the middle retail deck, relaxing coffee bar and wine expert Olly Smith's The Glass House wine bar.

The Atrium’s centrepiece and focal point is a ‘Star Burst’ sculpture that stretches all three decks; taking its inspiration from the star constellations used as historical naval references and draws on P&O Cruises British and seafaring heritage.

Richmond were previously involved in the successful relocation of the Spa area on Royal Princess, which moved to a location connected to the lower Atrium deck. The Oasis Spa on board Britannia has also been positioned here. This serene space with a moody palette offers guests a luxurious and calming environment.

Across the entire ship Richmond worked very closely with lighting design consultants, Maurice Brill Lighting Design, to ensure the lighting enhances the interior design elements, giving drama and depth to all the spaces.

In addition to the ship’s all day-dining restaurant, Horizon, and main dining rooms, Peninsular, Oriental and Meridian Restaurants the exclusive restaurant, Epicurean exudes glamour and luxury in an understated and comfortable way, with a soft cream palette and highlights of colour and opulent, metallic detailing.

P&O Cruises celebrates culinary talent with Britannia’s Food Heroes – a line up of the country’s celebrity chefs who lend their expertise to the varied fine-dining options on board, ranging from speciality restaurants and wine bars through to special gala dinners.

One of the superior restaurants is Michelin starred chef, Atul Kochhar’s Indian restaurant with a twist, Sindu.

The newest gastronomic experience on-board is The Cookery Club in association with celebrity chef James Martin. A dedicated, clean and functional space with 12 cook stations, the Club offers passengers the opportunity to enjoy a range of classes, hosted dinners, demonstrations and tastings. Here elements of display, in the form of graphic blackboards featuring menus and food illustrations, decorate the room and provide plenty of inspiration.

The Crows Nest observation bar, located at the fore of deck 16, with panoramic views has timber panelling, displaying historical P&O Cruises memorabilia, and an eclectic mix of comfortable seating including high wingback chairs.

The Crystal Room on deck 7 is P&O Cruises show lounge with a dance floor dedicated to ballroom and Latin dancing. The palette of subtle golds and pale blues is complemented by elegant, floral decoration, which is carried through into the balustrades. A graceful chandelier hangs over the dance floor and mirroring set around the outside, accentuating every aspect of the room.

'The biggest challenge of spaces within a ship is the lack of available height,' notes Richmond director, Terry McGillicuddy. He says the company has created the illusion of extra volume by coffering the ceiling, mirroring elements, and focusing the light to emphasise and enhance the space.

The 1,800 cabins and suites have been designed in a fresh and clean palette of soft calming greens or blues and respect nautical tradition whilst being equipped with latest technology you would expect to find in a five-star hotel.

Each outward-facing cabin has a balcony whilst all cabins feature exclusive artworks by selected British artists, as part of the multi-million pounds art collection on board.

McGillicuddy commented: ‘As a British company it has been an honour to have worked with P&O Cruises on the interior of their, and this country’s largest and most contemporary ship. British culture vastly influences the design of Britannia with a modern yet classic interior that reflects British elegance and incorporates nautical tradition.’

Britannia will arrive in Southampton in early March 2015, where the ship will be named on March 10. The maiden voyage starts on March 14. The inaugural season sees cruises to the Mediterranean, the Norwegian Fjords, the Canary Islands and the Baltic Sea.