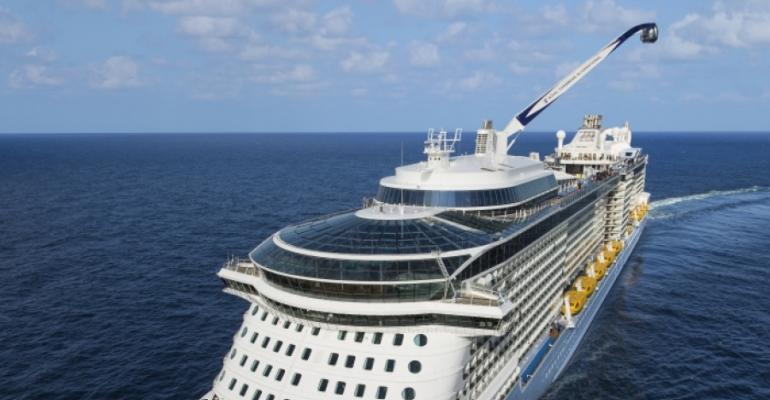 Quantum of the Seas 'a genuine hit' in China, Michael Bayley says

Royal Caribbean Cruises Ltd. expects a low single-digit yield decrease for China in 2016 due to significant industry capacity growth, ships going to secondary ports and new winter sailings, which earn less than those in summer.

That said, China remains one of the company's highest yielding markets, according to cfo Jason Liberty.

'The profitability of Chinese guests is still there, and it's one of our highest yielding markets,' Liberty told analysts on Tuesday during yet another earnings call peppered with China questions.

It costs a little more money to operate in China, and the company's SkySea joint venture had some losses its first year in operation.

'But our outlook continues to be very favorable for the China market,' Liberty said.

The new Quantum ships put a little pressure on the company's older ships, however the older ones still get a 'very nice premium,' he added.

Quantum of the Seas represents RCL's first year-round vessel there. 'While we don't get as much [revenue] in the winter in China as the summer, we do well in the winter,' Royal Caribbean chairman and ceo Richard Fain said.

'Overall, China is helping us in our yield improvement in 2016.'

In making a deeper push into secondary ports outside of Shanghai, pricing can be somewhat impacted. But Michael Bayley, president and ceo of Royal Caribbean International, said bookings are coming in as expected.

Responding to reports that Chinese travel agencies chartering ships lost money in 2015, Bayley said there was 'a bit of a hiccup' for some charterers out of Shanghai due to the MERS outbreak in Korea and a more active typhoon season. They did well the rest of the year, he added, and the company is in a good position with charterers for 2016.

'Quantum of the Seas is a genuine huge hit,' Bayley said, while Ovation of the Seas, to be based in Tianjin, is 'doing very well.' Every year the company doubles the number of travel agents selling cruises in China, and a new trade campaign will launch in the coming weeks.

Royal Caribbean is the largest brand there and fields a 'really professional and competent sales and marketing team' who've been with the company awhile.

'The spread between Royal Caribbean International and competing brands is significant,' Bayley said.

'We continue to be very positive about operating in China. This is the beginning of something we expect to be really, really positive.'