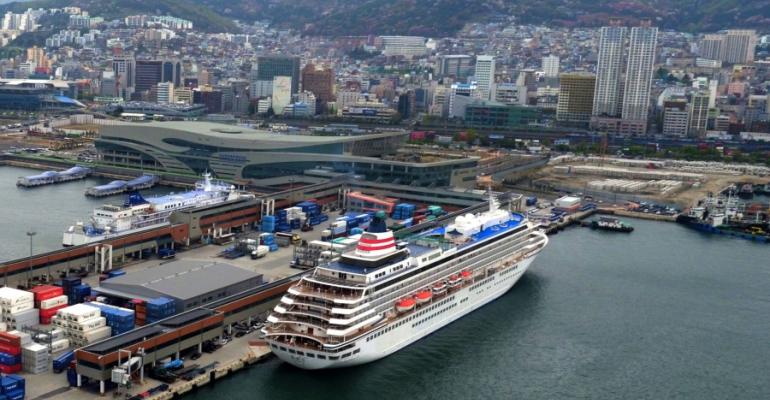 Korean port infrastructure is undergoing expansion including in Busan (above)

The future geography of cruise tourism came under focus at the second session today at Seatrade Cruise Asia 2016 in Busan.

Highlighting  Korea’s newly developed shore excursion programmes was Deok Soo Ahn, executive director of tourism infrastructure department, Korea Tourism Organization (KTO). He as optimistic about the Korean cruise industry as some 900 calls are expected in Korea this year, with more than half visiting Jeju.

Infrastructure is also being developed and by 2020 Korea should have 13 cruise berths. He said Korea will provide both concrete facilities as well as incentive programmes, including visa waivers  worked out in recent years. He highlighted attractions for cruise passengers in major cruise locations such as Jeju, Yeosu and Gangwon-do.

Giving a glimpse into new facts and figures on cruise deployments and destinations in 2016, was Ted Blamey, Principal, CHART Management Consultants. Giving  a snap preview of the Asia Cruise Trends report 2016 newly commissioned by CLIA Global, which is yet to be release, he said cruise lines will provide 1,473 cruises and a further 87 voyages in 2016,  a 43% jump from last year.

Operating days are up 22%.  Japan is Asia’s most visited destination, followed by Korea's Jeju island, Shanghai and Singapore . Five ports have 100 or more turnarounds, with 402 in Shanghai, 329 in Singapore, 170 in Keelung, 112 in Hong Kong and 110 in Tianjin.

He said 31 cruise brands are active in Asia, deploying 60 ships (up from 43 in 2013), of which 14 ships operate year round in Asia.  Short cruises are popular with 2 to 6 nights dominating but cruises are getting longer, he said. The industry will be generating capacity for 3.2m passengers in 2016 with the top six lines accounting for 81% of all Asia deployment and 90% of passenger capacity in 2016.

He said Asia Pacific is the fastest growing sector. Ponant has announced  four new ‘Explorer Class’ expedition ships due for arrival from 2018. He expects all will eventually come to Asia  with Explorer 1 arriving in 2018 offering luxury expeditions which provide guests with ‘unique cultural, historical, wildlife experiences.’

Michael Pawlus, director of strategic itinerary & destination planning, Azamara Club Cruises said its guests are primarily Americans, Canadians, British, Australians and other English speakers. One of its ships ship comes through Asia from November to March with an average cruise length here of 14-18 days.  He noted great improvements in Asian destinations over the past 25 years with regard to good infrastructure, more diverse shore excursions and more quality ports to provide an enriching and varied itinerary.

Kelvin Tan, commercial director, Asia Pacific, Celebrity Cruises said in order for a cruise hub to be successful, there needs to be a, ‘wealth of  population as a catchment market’. The location of the port is also important and its relation of its proximty to other ports.

He gave the example of Shanghai, Tianjin, Kobe, Yokohama, Hong Kong and Keelung in North Asia and Singapore and Malaysia in Southeast Asia. He said ships need sufficient berths, especially when cruise lines want to homeport.

Currently there is a scramble for berths in Shanghai, despite its current facilities and it catering to  several ships homeporting and turnaround ships already.  Asked to predict which ports which could make good homeports for domestic cruise markets, Tan cited Incheon and Busan. He also expects other ports to emerge for winter activities instead of ships having to relocate to warmer waters.

He said relocating ships to warmer waters in Southeast Asia or Australia may not be cost effective. Using alternative homeports in south China or the Pearl River Delta in the winter months may be alternatives. Keelung is also a port with potential as lines can run itineraries from there to neighbouring ports including those a bit further such as in the Philippines.

John Tercek, vp, commercial & new business development, Royal Caribbean Cruises Limited would like to bring more large ships to Asia. He emphasized that cruise is a supply driven business. He observed, ships in Asia are making incremental port calls annually. RCI has been growing at a rate of one additional ship a year in Asia over the past five years and now has five vessels in the region.

Customer source markets are also changing. Looking at where they cannot grow, he said there are concerns about geopolitical issues such as terrorism, high bureaucracy and taxes, economic issues in source markets and have slowed down in the Mediterranean. He said Asia continues to be attractive but is constrained by destination infrastructure.