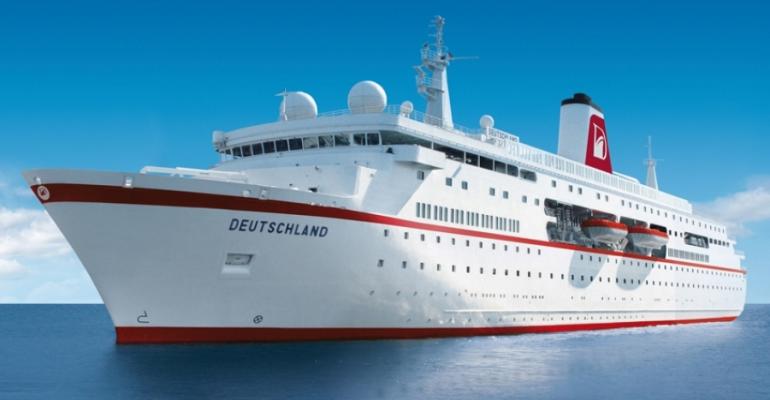 Deutschland - cruises to operate until scheduled docking in mid-November

The operating company of the cruise ship Deutschland has filed for insolvency. MS Deutschland Beteiligungsgesellschaft submitted its application to Eutin District Court on Wednesday.

The ship is to continue operating until its scheduled drydocking in November. The restructuring of MS Deutschland Beteiligungsgesellschaft and Reederei Peter Deilmann under debtor-in-possession management is to start immediately. MS Deutschland Beteiligungsgesellschaft said it aims to secure financing for the ship's overhaul, and hopes to have the vessel embarking on its scheduled world cruise in December.

The worsening of the liquidity situation following the MS Deutschland bondholders meeting on Oct. 8 and the lack of additional needed mid-term funding commitments were the causes for a 'surprisingly rapid negative development of the financial status,' MS Deutschland Beteiligungsgesellschaft said in a statement.

'I am very optimistic that in time, we will bring the MS Deutschland into safe waters,' Günther said. 'We will streamline the capital structure. One of my first major responsibilities will be to secure the financing of the drydocking in order to enable the vessel to start this year’s world cruise, as planned.'

Günther confirmed that cruises until the docking will operate as planned. Currently, the Deutschland is on a nine-day cruise from Larnaca to Valletta. Subsequently the ship will embark on an 11-day itinerary through the western Mediterranean to Lisbon before the scheduled overhaul. The first cruise after the docking is supposed to start in Cadiz on Dec. 7 to the Canary Islands.

Employees' wages are secured by Germany's Federal Employment Agency during the preliminary debtor-in-possession process. Details on the restructuring will likely be presented at a Nov. 12 bondholders’ meeting in Munich and announced at a new conference the following day.

Günther cited cause for hope in the Deutschland's future. 'The measures commenced as of 2013 showed positive results, but were not sufficient to bring about the necessary success. 2015 bookings are strong. At the same time, the restructuring of the balance sheet remains. The debtor-in-possession management filed for today provides us with the time and means to address these issues.'

Deutschland, the only cruise ship flying German flag, was delivered in 1998 to Reederei Peter Deilmann. After a successful start, the luxury ship and its operator ran into trouble following the death of Peter Deilmann in November 2003. His daughters' efforts to continue operating the company failed. Restructurings and changes of ownership followed, with yet another chapter added today.