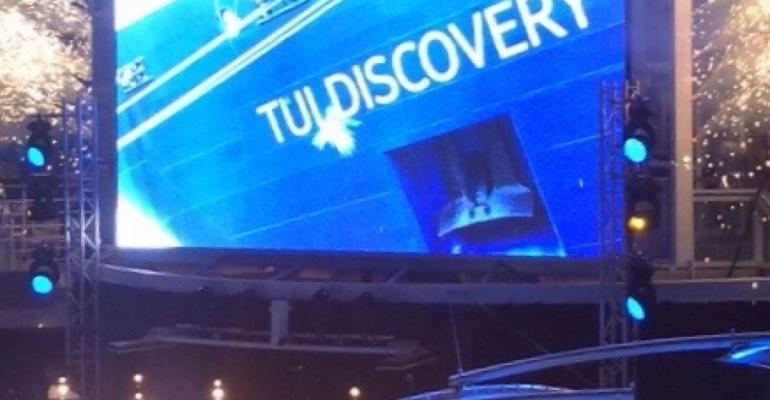 TUI Discovery, the newest addition to the Thomson Cruises fleet, is a step change for the company, managing director Helen Caron told Seatrade from on board the vessel berthed in her summer homeport of Palma de Majorca.

Built in 1995 for Royal Caribbean, the former Splendour of the Seas has just completed a £10m refurbishment at Navantia yard in Cadiz and was named Thursday evening in Palma in front of an audience comprising around 600 Thomson  travel agents, suppliers and media.

Twin godmothers for the event were two crew members - a head waiter from east India and a bar waitress from the Philippines. The after party which took place on the vessel's top deck under balmy skies featured music and dances from some of the key destinations Thomson Cruises visits, namely Spain, France, Italy, Greece, the Middle East and Caribbean.

Headling the event was UK singer Jess Glynne who performed with her live band in a half hour set which had guests dancing on the decks.

'The big focus on the makeover has been to provide upgrades and experiences that give guests more variety and unique choices when it comes to activities and entertainment,' said Doug Glenwright, cruise customer experience lead at Thomson Cruises during a tour of the ship's key new features.

He has worked at Thomson for 14 years mainly in the design of its holiday retail outlets but switched from shops to ships two years ago, 'taking responsibility for developing a product to appeal to a contemporary market and overseeing the implementation on TUI Discovery.'

He said he is most excited about the ship's bars, restaurants and entertainment venues which is best demonstrated in the ship's heart with The Atrium Bar a low key prosecco-themed bar and the Live Room next door which is a new, vibrant space with wrap-around bar selling eight beers on tap, bright banana yellow grand piano and large techno screen featuring virtual bands or used for interactive game shows and a small casino (with Royal Caribbean the space was 75% casino/25% bar, which ratio is now reversed on TUI Discovery). The space was rocking post-naming.

During the drydocking the vessel's livery was repainted with sleek new blue wave design. The refurb included building new venues such as Live Room, and Break Out & Escape (where up to 6 people are locked into a room and need to solve clues inside an hour to secure their release) from scratch.

Prior to the naming Nick Longman, md TUI UK & Ireland told guests the latest ship is just the start of a major expansion for Thomson Cruises which will see Legend of the Seas becoming TUI Discovery II in 2017 followed by the addition of Mein Schiff 1 in 2018 and Mein Schiff 2 in 2019.

Thomson Spirit and Majesty will leave the fleet at the end of 2017 while Thomson Celebration and Dream will remain in the fleet.

Caron added, 'the entry of TUI Discovery sees us taking away traditional thinking about cruising and trying to cater to every single passenger's needs wether its the puzzle room, adults sun deck, kid's  X-Box centre or evening entertainment.' All 800 seats in the theatre have been replaced and 11 new shows covering a full spectrum of entertainment have been specially created for the new ship ranging from Legends Live to dancers with interactive LED costumes and classic Broadway shows.