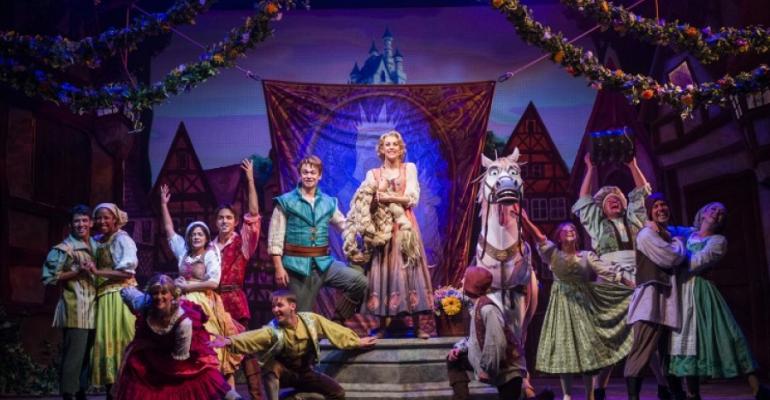 The characters and music from the animated film 'Tangled' are now part of an original Disney Cruise Line stage show aboard Disney Magic.

The production, which features new music by Academy Award-winning composer Alan Menken, was previewed to reporters during the ship's turnaround at PortMiami Wednesday and a scene was streamed live on the Disney Parks Blog home page.

'Tangled: The Musical' is based on the 'Rapunzel' fairytale and will premiere aboard Disney Magic during the current four-night Bahamas sailing.

Menken ('The Little Mermaid,' 'Beauty and the Beast') and lyricist Glenn Slater, the prolific pair behind the original soundtrack for 'Tangled,' teamed again to adapt the score and story for the stage. Three new songs complement the score from the film.

They include master puppet designer Michael Curry, whose creations are featured in Disney’s Tony Award-winning musical 'The Lion King' on Broadway. The costumes were created by Tony Award-winning designer Paloma Young, and the set designs are by Bradley Kaye (Disney’s 'Aladdin—A Musical Spectacular').

'Tangled: The Musical' is the newest addition to the lineup of Disney Cruise Line-exclusive live entertainment performed every voyage aboard Disney Magic. The show joins 'Twice Charmed: An Original Twist on the Cinderella Story' and 'Disney Dreams … An Enchanted Classic,' which features a new segment from the blockbuster animated hit 'Frozen.'

Disney Magic is scheduled to sail four-night Bahamas and five-night western Caribbean cruises from PortMiami through the new year.