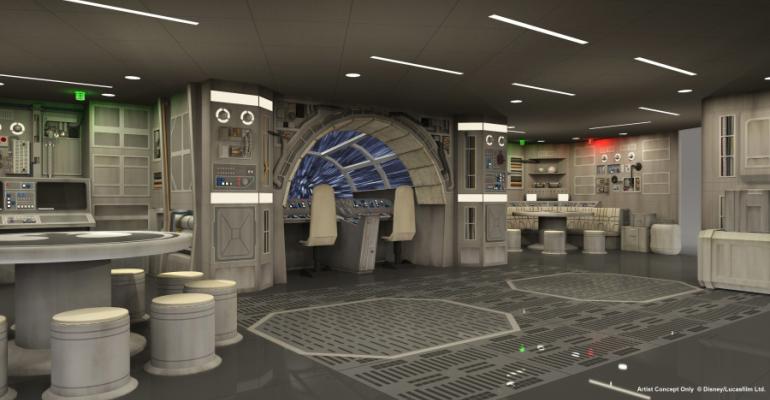 This fall Disney Dream will add two interactive youth areas, one themed to Star Wars and another to Disney Infinity. Also, a whimsical sweets shop serving gelato and the Bibbidi Bobbidi Boutique will debut after the ship undergoes drydock Oct. 4-25 at Grand Bahama Shipyard.

A newly themed area in Disney’s Oceaneer Club, open to ages 3 to 12, is inspired by the Star Wars saga. Star Wars: Millennium Falcon, is a 'Force-'filled play area inspired by the spacecraft from the saga. Kids can join the Rebel Alliance in the battle of good versus evil by assisting with the navigation of this space vehicle.

There will also be Star Wars-themed crafts, games and activities. And youngsters can watch episodes from the new Disney XD animated series, 'Star Wars Rebels,' on a large screen or virtually join the rebellion at gaming stations featuring the series.

There will be a shipboard version of the Jedi Training Academy, too.

Also in Oceaneer Club, a high-tech interactive space based on the Disney Infinity video game offers more fun for kids. In the Disney Infinity Toy Box area, children can play together with virtual experiences and immersive activities. Customized, on-screen adventures will bring to life characters and stories from across The Walt Disney Co.

The complete set of Disney Infinity character figures will be on display for creative inspiration and available for game play.

Vanellope’s Sweets & Treats will serve handmade gelato and ice cream, an assortment of candy and other novelties for purchase. New to Deck 11, the space will waft the smell of freshly baked waffle cones from two entrances, inside Cabana’s restaurant and outside by the pool deck.

Bibbidi Bobbidi Boutique, coming to Deck 5 midship, will offer princess and pirate makeovers. Kids 3 to 12 can transform with the help of a fairy godmother-in-training. On pirate party night this boutique becomes The Pirates League for pirates of all ages.

Exclusively for adults, Deck 13 forward will include a new water feature, Satellite Falls, a circular splash pool with benches and a gently falling rain curtain. Around this upper deck, adults can soak up the sun in loungers or relax in the shade under a canopy.