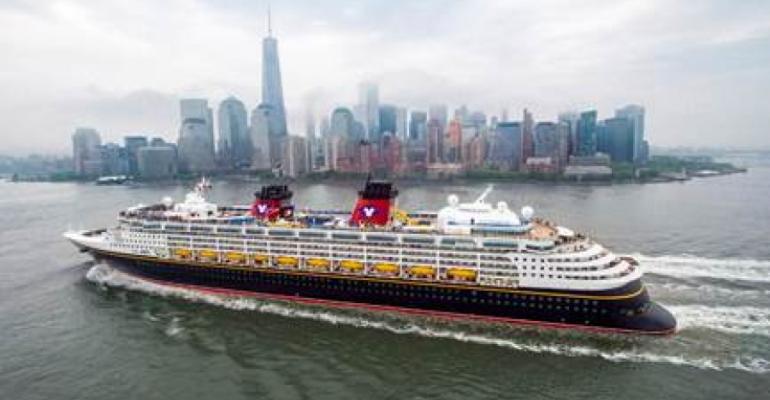 Disney Magic arrived at New York City May 18 as part of a trans-Atlantic crossing to begin a summer season in Norway and Europe. Disney announced the ship will return to New York in fall 2016

In fall 2016, Disney Cruise Line will return to New York for a limited time with sailings to the Bahamas that include a visit to Walt Disney World in Florida. New seven-night Caribbean cruises from Miami and a return to Galveston round out the season.

On Oct. 7 next year, Disney Magic will sail from New York on an eight-night Bahamas cruise that stops at Castaway Cay, Nassau and Port Canaveral, the gateway to Walt Disney World.

Disney Magic will sail from New York on seven-night cruises Oct. 15, 22 and 29 that stop at Castaway Cay and Port Canaveral.

On Oct. 2, Disney Magic will sail from New York on a five-night cruise to Halifax, Nova Scotia, and Saint John, New Brunswick.

In late 2016, Disney returns to Texas with a lineup of seven-night itineraries, including Bahamas sailings that stop at Castaway Cay. On Nov. 18, Nov. 25, Dec. 9, Dec. 23 and Dec. 30, Disney Wonder will sail on a seven-night Bahamas itinerary from Galveston to Key West, Castaway Cay and Nassau.

On Dec. 2, Disney Wonder will operate a seven-night Caribbean itinerary from Galveston to Falmouth, Grand Cayman and Cozumel. On Dec. 16, the ship will sail on a seven-night cruise to Cozumel, Costa Maya and Grand Cayman. Two four-night jaunts to Cozumel on Nov. 10 and Nov. 14 complete the Galveston program.

Most of the late 2016 cruises include Halloween or winter-holiday events.

Bookings for the new itineraries open to the public on May 20.