Dominica calls carry on, as do cruise-friendly initiatives 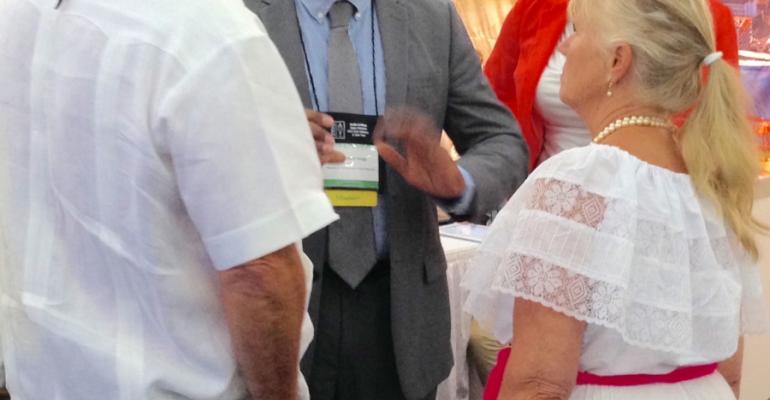 Dominica has handled its first cruise call following the deadly Tropical Storm Erika, and Tourism Minister Robert Tonge was highly visible at the Florida-Caribbean Cruise Association conference in Cozumel—both to assure the island is ready for ships and to tout cruise-related initiatives.

'It's very important for us to ensure the experience for passengers is a lot better,' Tonge told Seatrade Cruise News.

Cruise line shore excursions are now getting priority access to key sites like Trafalgar Falls, Emerald Pool and Champagne Reef in an effort to rein in 'gypsy taxis' that deliver inferior service.

The tours dispatch system is being upgraded so traffic to the various attractions is spread out, and tour bus drivers will be certified. The tourism ministry is working closely with officials to address vagrancy and with the police to reduce crime. And cruise ships will be allowed to open their casinos and shops during the end of their stay in port.

His briefing clearly made an impression.

Later, during the conference's CEO Round Table, Arison singled out Dominica as a destination that's making an extra effort. He specifically mentioned how cruise ship shore excursions are getting priority access to the island's main attractions.

'That's a very difficult thing to do politically,' Arison stated, 'but it will create business for them in the long term.'

No calls were canceled after Erika, which hit Dominica hard before the cruise season started. The first ship post-storm, Royal Princess, visited Oct. 5, without issues, according to Tonge.

On Aug. 27 Erika deluged Dominica with rain, causing mudslides that washed out bridges and roads. At least 31 people were reported dead.

For the most part, the impacted areas are not traditional tourist draws. Both cruise ports, Roseau Cruise Ship Berth and the Woodbridge Bay Port, were unaffected, and attractions like Trafalgar Falls, Emerald Pool, the Botanic Gardens, Cabrits National Park and Kalinago Barana Aute are fully accessible.

At the FCCA conference, Tonge and Kathleen Cuffy, product promotions manager for Discover Dominica Authority, handed out a card with links to view post-Erika photos (http://bit.ly/1j3PO7J) and video (http://bit.ly/1jBexAt).

This cruise season is projected to be about the same as last year's, which drew 281,000 passengers.

One way of helping the country is to send more ships, Tonge said, adding that he suggested that to cruise line executives during meetings at the FCCA event.

In additional news on the excursions front, Dominica will be working to develop more experiential tours and community tourism. The minister thinks it's a shame if visitors just photograph waterfalls. He'd like for them to experience life as islanders do—maybe with a dip in a river followed by 'a nice rum punch,' or snorkeling at pretty Scotts Head Beach and soaking in the warm sulfur pools of Soufriere Hot Springs.