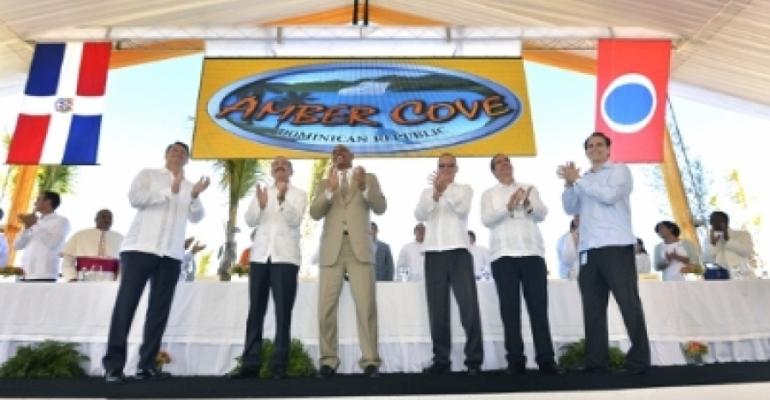 Featuring a two-berth port and a 25-acre landside development nestled in a picturesque cove, Amber Cove will provide cruisers from eight of Carnival Corp.'s brands with a gateway to the Puerto Plata region, known as the Amber Coast.

In Amber Cove's first full year of operation, 140 calls by 23 ships are scheduled.

'It is an honor to bring Carnival Corporation guests to Amber Cove, which is absolutely beautiful, and to reestablish regular cruise visits to the Puerto Plata from major cruise brands for the first time in nearly 30 years,' said Alan Buckelew, chief operations officer of Carnival Corp., who also attended Monday's ceremony.

'It is just as exciting to know that we will be bringing guests to the newest destination in the Caribbean, the world's most popular region for cruising,' Buckelew added. 'We are all looking forward to Amber Cove and Puerto Plata quickly becoming a very popular port of call.'

Amber Cove opens expanded itinerary options and pairs with the company's other nearby ports of Half Moon Cay, Princess Cays and the Grand Turk Cruise Center only 100 miles to the north to anchor new central Caribbean itineraries.

It is among about 60 ports Carnival Corp. brands visit in the Caribbean, and is strategically located to be incorporated into itineraries featuring potential stops at Cuba in the future.

Marie McKenzie, vp global destinations services and sources, and David Candib, vp development and operations in the global port and destination development group for Carnival Corp., were on hand, too.