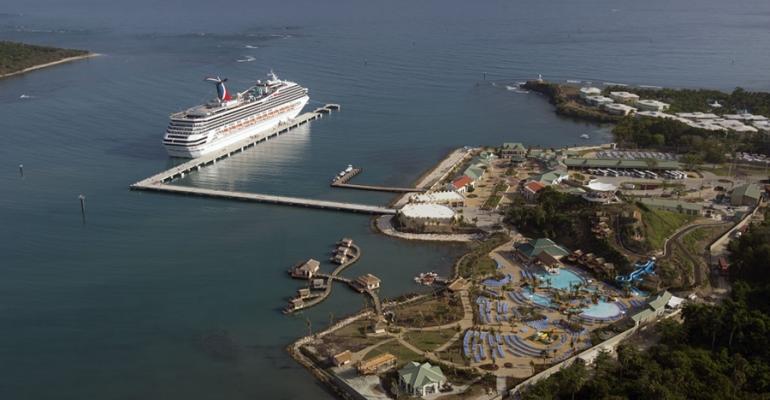 Carnival Victory on Tuesday became the first ship alongside at the $85m Amber Cove, signaling a return to regular cruise calls at Puerto Plata on the north shore of the Dominican Republic for the first time in decades. 'This is important for the whole country, not just Puerto Plata,' said Orfila Salazar, director of cruise for the Dominican Republic's Ministry of Tourism.

'This is going to generate jobs, direct and indirect, and it will open the door for investments in other tourism destinations in the country,' Salazar told Seatrade Cruise News during the Florida-Caribbean Cruise Association Conference and Trade Show in Cozumel.

Port and tourism representatives at the trade show's Dominican Republic booth were electrified when Micky Arison, chairman of Carnival Corp. & plc and the FCCA, stopped by to show the latest pictures of Carnival Victory at Amber Cove he had posted on Instagram.

Carnival Corp. teamed with Grupo B&R, a Dominican company to build this two-berth facility with entertainment, dining and retail, plus a vast tours dispatch area. Some 350,000 passengers from eight Carnival brands are projected to call in the first year of operation.

'For me it's beautiful to be back in this show,' said Patria Rodríguez de González, board member of the Puerto Plata Chamber of Commerce, who told how excited Dominicanos are to have cruise ships returning to her city.

'The destination has been working really hard to prepare to receive this new development. It has energized people,' Rodríguez said. She added government and the private sector continue working together to make improvements that will entice cruise visitors to explore beyond Amber Cove.

For example, Carnival Victory passengers were being treated to a folkloric festival in Puerto Plata's Plaza Independencia—an event that will be staged for every cruise call.

'We have history. We have culture. Amber Cove is excellent, but we want people to [cruise visitors] to see our country,' she said.

For his part, Arison during the FCCA conference's CEO Round Table said 'We expect Amber Cove and Puerto Plata to be a huge positive for the entire region. Speaking to the ports here from the Dominican Republic, the excitement was palpable.'