Dublin going for a doubling of cruise business 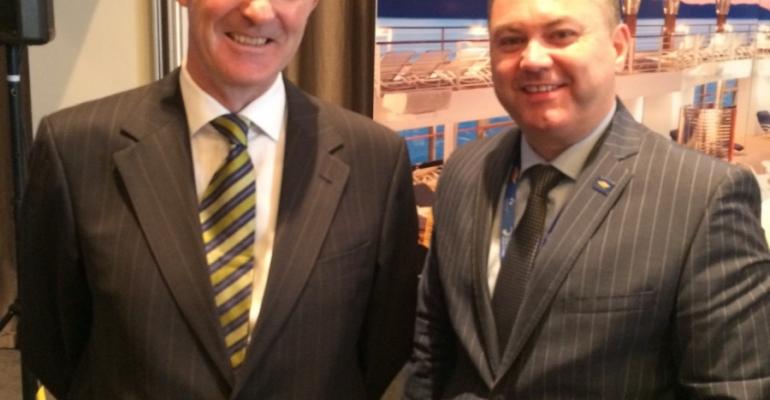 Dublin Port Company and Dublin City Council, co-hosts of Cruise Europe 2016 conference, are hoping to double the amount of cruise business to Ireland’s capital in the next decade.

113 cruise ships will bring over 180,000 passengers in 2016 and the port has started a masterplan expansion to open it up to larger cruise ships and container ships. The Alexandra Basin Project includes the construction of a new cruise berth for ships up to 340mtr in length within striking distance of the city centre.

At present, the bigger cruise ships like MSC Splendida, Royal Princess and Celebrity Silhouette have to reverse up the Liffey and access is restricted by tides.

Dublin’s success in attracting cruise calls is matched throughout Ireland with 302 ship calls and 346,000 passengers last year and a 61% increase in passenger numbers in the last five years, Patrick O’Donovan, Irish Minister of State for Tourism and Sport told delegates at the official opening of the conference today.

Eamonn O’Reilly, chief executive of Dublin Port Company spoke of a ‘synergistic coming together’ between the city and port which were ‘not as one before’. He said the €230m investment in the new cruise facility capable of handling two megaships at the same time, to be ready four years from now ‘is a testament to the rebuilding of links between the port and city and an on-going strengthening of partnerships with the cruise lines.’

He told delegates the second pile for the new berth 'is going in as I speak'.

A number of cruise line executive speakers had the opportunity to sample a taste of Dublin ahead of the Cruise Europe gathering starting with a panoramic view of the city from the top of one of Europe’s largest stadiums on the Etihad Skyline Rooftop Tour at Croke Park. From 17 storeys high on the roof of the stadium, and with the sun shining brightly, the tour offered a 360 degree unobstructed view of the port and famous surrounding landmarks.

No visit to Dublin is complete without food, drink, history and some music. The city’s newest interactive visitor experience Epic Ireland, located in the vaults of the CHQ building dating to 1820, tells the story of the Irish people and how they changed the world.

Afterwards, execs had a chance to take in some shopping in and around Grafton Street using the Cruise Dublin Visitor Card which offers special concession prices to some of the city’s historic sites, cultural and sporting attractions as well as discount and VIP luxury services in selected shops including Appleby Jewellers, Rocks Jewellers, Monaghans Cashmere, Brown Thomas department store and Danker Antiques.

A visit to the Irish Whiskey Museum followed which uncovers the story of the Water of Life(the name for whiskey in Irish Gaelic)  dating back to the 1800s, followed by whiskey tastings.

All delegates, including 100 Cruise Europe members, spent the evening at the Guinness St James’s Gate Brewery, Ireland’s top visitor attraction, discovering 250 years of Guinness history, sampling pints at the Gravity Bar before enjoying dinner and dancing to music from a live band.